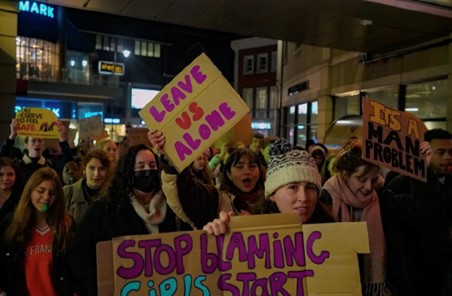 On November 4th, 2021, people across Canterbury came together to ‘reclaim these streets’. Politics and History student Meg Payne was one of the organisers. She blogs about the campaign here.

‘In the wake of increased spiking across the country, and in the aftermath of the murders of Sarah Everard, Sabina Nessa and Julia James, I, along with fellow students and members of the Canterbury Labour Party, organised a march to stand against violence on our streets. While this was predominantly aimed at standing in solidarity with women and girls, as misogynistic violence is an undoubted pandemic, the aim of this march was to include and welcome anyone who feels unsafe walking alone on the streets, or when taking public transport.

I created Instagram and Facebook pages about 2 weeks before the event to spread the word, and while the Instagram gained 280 followers in this short space of time, we could not have anticipated the success the march would have had. Hundreds of people, including media and news outlets and representatives from both Kent and Christ Church universities, came out in the cold and dark to support our cause. Armed with whistles and signs, we marched through Canterbury high street, making as much noise as possible, punctuated by incredible speakers, including city councillors, a representative from the Rising Sun domestic violence charity, and anyone who felt strongly about the issue. Passion and emotion were palpable throughout the entire evening, which culminated in a candlelit vigil and two minutes silence outside Canterbury Cathedral, for those we have unfortunately lost to violence on our streets.

The support for this event was overwhelming for all involved, but it certainly highlighted the widespread and looming concern that the majority of people have about violence on our streets, whether it be for themselves or their loved ones. The presence of some intoxicated men touching female marchers during the silence, asking us why we weren’t citing statistics about violence against men, ironically highlighted the crux of this issue, as supporters suffered harassment on a march fighting against this exact thing. The fight is clearly not over, and while Reclaim These Streets provided an outlet for people to come together in solidarity with each other, voice their concerns about misogynistic violence and harassment, and convey the scale and systemic nature of this problem, it is not enough to stop it. We must continue to campaign for education from a young age to prevent it, to launch real investigations into the causes, and to curate greater equality within our society. Reclaim These Streets was the beginning, but it was certainly not the end.’

Meg Payne is studying for a degree in History and Politics (BA Hons).