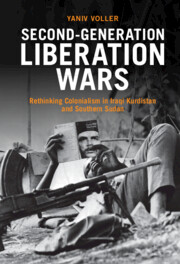 Yaniv Voller’s intention with this new title was to make the research as accessible to as broad an audience as possible.

“I hope that the book will stir a renewed debate about the nature of colonialism and decolonisation, explain better the origins of civil wars and provide tools for researchers and students to explore conflicts.” Voller told us.

The formation of post-colonial states in Africa, and the Middle East gave birth to prolonged separatist wars. Exploring the evolution of these separatist wars, Voller examines the strategies that both governments and insurgents employed, how these strategies were shaped by the previous struggle against European colonialism and the practices and roles that emerged in the subsequent period, which moulded the identities, aims and strategies of post-colonial governments and separatist rebels. Based on a wealth of primary sources, Voller focuses on two post-colonial separatist wars; In Iraqi Kurdistan, between Kurdish separatists and the government in Baghdad, and Southern Sudan, between black African insurgents and the government in Khartoum. By providing an account of both conflicts, he offers a new understanding of colonialism, decolonisation and the international politics of the post-colonial world.

You can discover more about the title here.