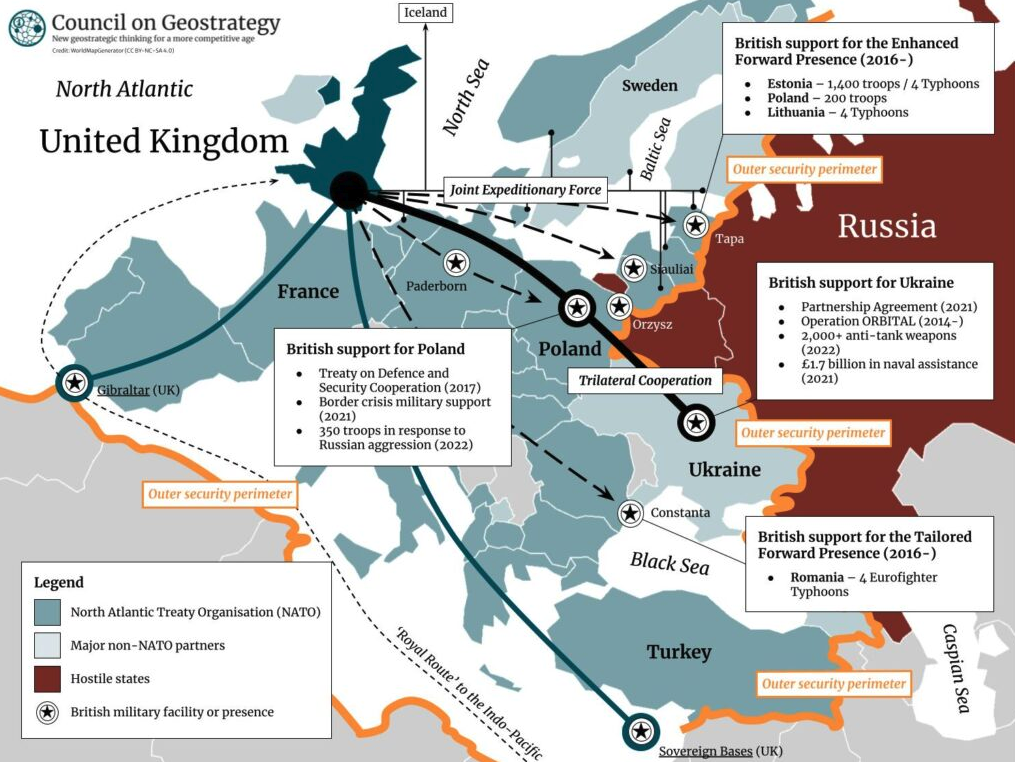 As the tension on the border of Russia-Ukraine border develops, Professor Richard Whitman explores the U.K.’s position in the heightening crisis for the Council on Geostrategy website.

Already, prior to the renewed Russian aggression towards Ukraine, the UK had become significantly engaged in Eastern Europe through its contributions to NATO’s Enhanced Forward Presence by leading a battalion-sized battlegroup (in Estonia) and contributing to another (in Poland), while simultaneously contributing air power to the Baltic Air Policing Mission. Britain has also deployed Typhoon fighters to Romania since 2016 as a contribution to NATO’s Tailored Forward Presence in Southeastern Europe.

In addition to these ongoing deployments, the UK has sent additional military support in the form of the Royal Engineers to Poland to counter the border crisis created by the regime in Belarus and 350 Royal Marines in response to the build up of Russian forces on Ukraine’s borders. These commitments are made under the UK-Poland Treaty on Defence and Security Cooperation[↗] signed in 2017. Britain has also expressed support for Lithuania as it has borne the brunt of Chinese aggression in response to Vilnius’ support for Taiwan.’

The UK’s new expanding relationships to strengthen Europe’s security draw an unfavourable comparison with the current lack of similar impetus in the diplomatic and security relationships with other significant European powers, not least France and Germany. To begin with, the so-called ‘E3’ format that brings together Europe’s three largest powers for a shared dialogue on security and defence has somewhat atrophied since Britain’s departure from the European Union (EU). France and Germany’s positions on the Russian threat to Ukraine have also been softer than the UK’s position.

Indeed, France and Germany are heavily invested in the flawed Normandy Format, with Russia and Ukraine. Although the four countries came together during the recent summit in Paris, it bore little fruit, not least because Ukraine is marginalised and Russia is not treated as the aggressor in the conflict. The Normandy Format has focused primarily on giving effect to the Minsk II accord and which has become a largely moribund peace process – previously described in this magazine as ‘a rotting corpse slumped over a conference table’.

The UK, outside the Normandy Format, has taken a different approach. By providing bilateral military support to Ukraine, it has focused on growing the capacity of Ukraine’s armed forces to deter the threat from Russia. Operation ORBITAL, the UK’s Ukrainian military training and capacity building operation, has been expanded and since a Partnership Agreement was signed with Ukraine in 2021 there has been an additional £1.7 billion in naval assistance to furnish the Ukrainian Navy with new frigates, missile craft and minehunters, as well as the promise of Brimstone naval cruise missiles. In stark contrast to France and especially Germany, Britain has also supplied the Ukrainian Army with over 2,000 light anti-tank weapons and other defensive military equipment.

Likewise, despite France’s and Germany’s professed support for multilateralism with their ‘Alliance for multilateralism[↗]’, it is the UK that has promoted new and creative forms of multilateral European cooperation. First, the UK recently joined[↗] with Poland in a new format for trilateral cooperation with Ukraine, bringing together the two Eastern European countries – one a close NATO ally, the other with aspirations to join – with the greatest will and capacity to resist Russian aggression.

Second, in Northern Europe and the ‘Wider North[↗]’, the UK has led the way with the formation of the Joint Expeditionary Force (JEF), which enlarged further last year to draw in Iceland. The JEF brings together the ten like-minded countries weaving together collaboration between NATO (Denmark, Estonia, Iceland, Latvia, Lithuania, the Netherlands, Norway and the UK), and non-NATO states (Finland and Sweden). The JEF’s focus on utilising each participant’s existing high readiness forces, is intended to allow for deployment as needed.

These new frameworks are a practical demonstration of the determination of the UK to remain – in the Integrated Review’s words[↗] – ‘the leading European ally within NATO, bolstering the alliance by tackling threats jointly and committing our resources to collective security in the Euro-Atlantic region’. Moreover, they reveal the extent of Britain’s ‘tilt’ to more exposed and vulnerable allies and partners on the frontiers of the European continent. As the Integrated Review puts it[↗]: ‘Operating across the Euro-Atlantic region, and with a focus on the northern and southern flanks of Europe, we will support collective security from the Black Sea to the High North, in the Baltics, the Balkans and the Mediterranean.’

Indeed, as the map above shows, Britain’s contribution to the security of states under threat from Russia, as is currently the case for Ukraine, illustrates that suggestions from some quarters that a post-Brexit UK would be a diminished European diplomatic and geostrategic presence, were very wide of the mark. No European country has sovereign territories in three locations of the continent, such an extensive military presence, nor a maritime force of the Royal Navy’s scale, sophistication and reach.

Britain and the European security architecture

Emmanuel Macron, President of France, has used Russia’s aggression towards Ukraine to reassert that Europe’s security architecture needs reappraisal. His observation, that there is the need to consider whether Europeans have the correct arrangements for their short, medium and long term security needs, is correct. NATO has recognised the need for reflection and has already embarked on a process to produce a New Strategic Concept to set the direction for the organisation over the next decade. The EU’s new Strategic Compass will also be unveiled next month, even if it will lead only to, at best, modest enhancements to the EU as a security provider.

Yet, Mr Macron’s approach is to predetermine the outcome of any debate by maintaining that ‘Europe’ (understood as the EU) needs to establish its own security framework. However, while Macron is focused on musing possible futures for European security, the UK has demonstrated the scope that exists for creatively building networks that add capacity and enhance Europe’s collective defence. Beyond Ukraine and Poland, as well as the Baltic and Nordic states, other Europeans have started to take note: Germany, the Netherlands and Poland are reported to have recently touted[↗] the idea of a new European Security Council (ESC) under British leadership. This must sting in Paris given that Macron put forward the idea for an EU-led ESC in his speech on European reform in 2017. It highlights just how much the UK has become an essential European ally and partner, despite Brexit.

Of course, it was not supposed to be this way: only a few years ago, many European analysts questioned Britain’s support for European security and asked whether the country was spurning Europe to embrace a more active role in the Indo-Pacific – a perspective[↗] that surprisingly still persists. But just as the UK has proven that it is as committed to European security as ever, it has also demonstrated how the Euro-Atlantic and Indo-Pacific worlds are increasingly connected. The growing diplomatic and military activism of ‘Global Britain’ is distinguished by the network of bilateral, trilateral and ‘plurilateral’ relationships that it is building and deepening in Eastern Europe and overseas. It is a new network of influence, through new relationships, which is consolidating the UK’s position as the leading European power in the Euro-Atlantic area.