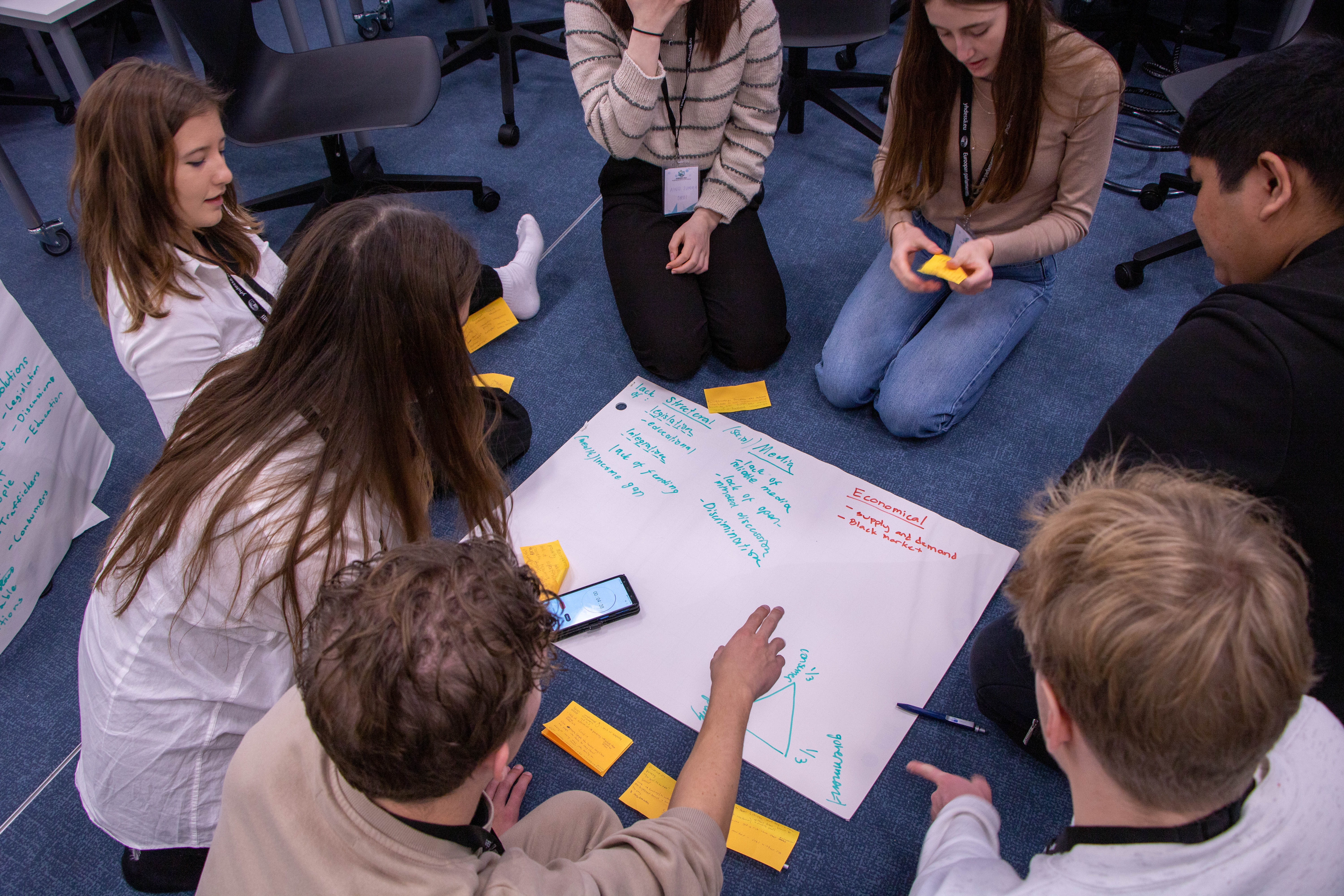 Théophane Gauthier is in Stage 2 studying Politics and International Relations. In 2017, he discovered the European Youth Parliament (EYP) not thinking that this discovery would be life-changing.

The European Youth Parliament (EYP) is a non-partisan pan-European peer-to-peer educational program enabling young Europeans from all social backgrounds to exchange and debate on European issues, with a main mission -to empower youths, to become informed and active citizens.

The format of the EYP events are ‘sessions’ -one of a kind European parliamentary simulations. The first step of a session is the necessary and funny “Team-building”, in which the “delegates” play games to get to know each other better, so they can be even more productive in the “committee work”. At this step, the delegates are divided into committees and must write a “resolution” (like the real ones in the European Parliament) but the process is not like the EP.  Members of the European Parliament would be sat around a table debating positions, point by point, with an endless working time. EYP delegates will in contrast use paperboard, post-its, markers, etc… in order to shape and write a resolution, which will be submitted to the “General Assembly”. This means other committees can adopt or reject your resolution, debating about it. All these formal experiences are often followed by a Europarty or Euroconcert, a European cultural exchange, socialising and showcasing everyone’s talents.

But these events could never exists without the “officials”. Officials are divided in three main teams : Academic, Media and Organisation. What Orga Team does speaks by itself. The Academic Team is composed by all the chairs that help delegates debate, and prepare subjects of debate, etc… Finally, my favourite, the Media Team is here to document fabulous memories for delegates and officials. Depending on the National Committee, there’s even a Jury Team that selects delegates that will go on national or international sessions.

The best and most magical part of EYP for me is the sense of empowerment. I learnt most of my soft skills in EYP. Being a delegate has taught me to listen to others, write a resolution, write an attack or defence speech. The Organisation team lets me, with the support of the National Board, organise a whole event from travel transfers to food; the academic team makes me experience debate leadership and management; the media team lets me express my creativity by using a photo/video camera, a microphone, Lightroom, Premiere Pro or Canva; finally, when I can lead these teams as Head-Organizer, President or Editor, I definitely learn how to manage and lead a team.

Empowerment is also an important element for those of us who have the chance to be on boards of National Committee (the French one for me): supporting teams, defining communication strategy, implementing inclusion and diversity policy, make contacts with schools, etc..

Finally, the most empowering factor of all has been friendships and travel. EYP is present in 40 countries, beyond EU borders, from the United Kingdom to Russia or Armenia, passing through Iceland and Kosovo. Thanks to this organisation (and the financial help of its travel funds), in 2021 I visited Slovenia (August), Germany (September) and lastly Finland (November), without counting all the cities in France EYP has taken me to. During the sixteen events I’ve been in over four years -in which the half only in the last six months, I’ve met extraordinary people with who I’ve been creating wonderful true friendships. When you think about it, it is extraordinary to have friends in either Latvia, Denmark, Netherlands, Slovenia, Germany, Ukraine, Austria, etc… These friendships generally remain after the event, when travelling together on another event somewhere else in Europe!

EYP is a truly amazing experience that lets you become an active citizen through innovative events and programs that make you grow. The European Youth Parliament has also others programs, like Understanding Europe, with EYP volunteers going into schools to make discover the European Union and its institutions ; or OpenVox, a French committee program that implements debating societies in high schools.

The European Youth Parliament also gives the opportunity for young people to meet and exchange with European decision-makers, for them to make their voices heard.  I had the opportunity to participate in the Young Ambassadors on the Future of Europe program. This opportunity was meant in the frame of the Conference for the Future of Europe, currently going on. With twenty other Young Ambassadors, we had the task to summarise in a booklet dozens of EYP events resolutions and a thousand answers to a poll young Europeans filled, on various subjects from European Values to Digitalisation, Democracy or Health, passing by Employment, Social Justice, Energy or World Affairs. During three months, I worked on summarising youth’s speech and presenting it to the European decision-makers. The final step of this program was a trip to the European Commission in Brussels -which unfortunately I couldn’t attend due to COVID -over two days, twelve of the Young Ambassadors presented to European stakeholders and MEPs their conclusions, up to the Vice-President of the European Commission on Democracy and Demography, Dubravka Šuica (HR).

This is something I could never have contemplated without the European Youth Parliament.

So from a little city in Normandy, I was able to visit and meet people from small and large cities in Lapland (Finland), Hesse (Germany), Tyrol (Austria), Ljubljana (Slovenia), Athens (Greece) or Erevan (Armenia); while discussing and learning about European political subjects and more importantly, empowering myself by documenting, leading a team or simply exchanging with one another. Truly life-changing.

Now that you know what EYP is, let me say to you: See you somewhere in Europe!’

Théophane Gauthier is a Stage 2 French student, studying for a Politics and International Relations (Bi-diplôme).