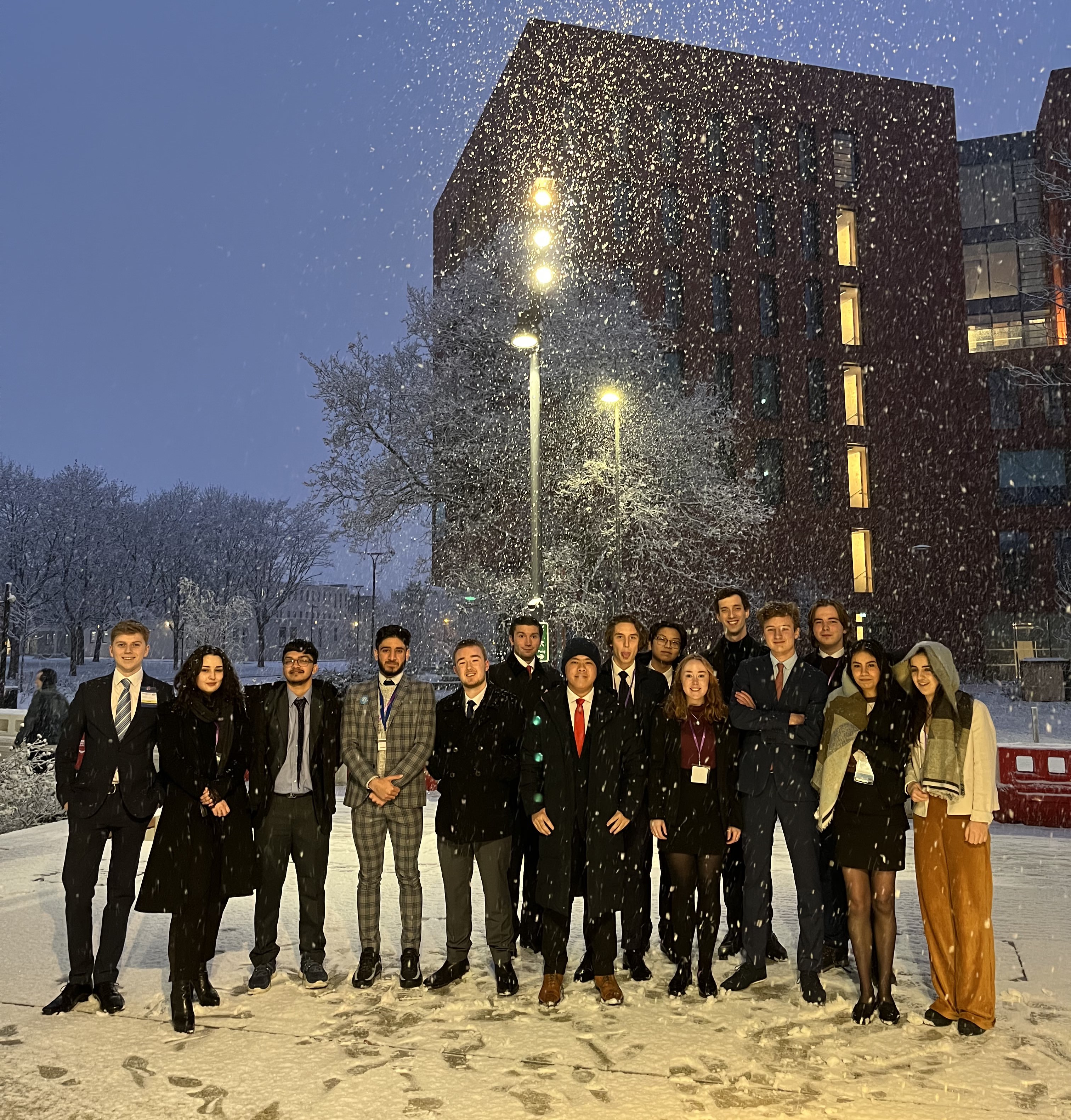 Five of our students participated in the Model United Nations Conference ‘WarMUN 2021’ with 80 students from all over the United Kingdom at this annual weekend hosted by the Warwick University UN Society. Théophile Bernard was one of them.

From Friday 26th November to Sunday 28th November, I participated with four other Kent students to the 2021 WarMUN Conference. 80 students from all over the United Kingdom travelled to the University of Warwick for a weekend and joined this annual event hosted by the Warwick UN Society.

MUN are about navigating your country through a diplomatic minefield: you need to improve the global situation while making sure that your interests are never off the table.

MUN stands for “Model United Nations”: it is a UN simulation. Each student – known as a delegate – represents a specific country at a UN committee meeting and works with other delegates to solve a given issue. To do so, they write and make speeches, and discuss to reach a compromise. A successful conference is when delegates manage to write a meaningful resolution and get it passed! MUN are thus about navigating your country through a diplomatic minefield: you need to improve the global situation while making sure that your interests are never off the table.

MUN conferences can look quite serious and complicated at first glance, but once you have caught its spirit, you cannot get tired of it! It is a great opportunity to meet a lot of very different people, get to learn about current issues and improve your public speaking and teamworking skills.

Universities usually have their own MUN society to provide training and organize conferences. I joined the Kent MUN society last September: we have weekly trainings, and we will be hosting our own conference from February 4th to February 6th! Moreover, societies also send their members to conferences as a “delegation”.

The Kent MUN society sent five of its members to WarMUN 2021 last November. We all did something different during the conference: I joined the UN Security Council and represented Estonia over the topic of military disengagement, such as the USA in Afghanistan last summer or France and its allies in Sahel. Two other Kent students, Valentine and Louie, were delegates at the World Health Organisation and the UN Economic and Social Council. Phillip, our Director of Conferences, chaired the Security Council committee: he led the discussions with another chair during the conference.

At last, Dan, the Kent society President, joined the Crisis committee, a special feature of MUN: instead of representing a country and debating about current issues, Crisis is about embodying characters and winning a war. It can either be historical or fictional: in Warwick, the Crisis committee was about the television series Avatar: The Last Airbender, but the first Crisis Dan participated in was about the Napoleonic wars.

It was the first time most people were attending a conference in person since the Covid-19 outbreak and everyone was happy to be there! In addition to working sessions, we all ate together, and socials were organised in the evenings, allowing us to meet people from different committees. And as an added bonus the University of Warwick campus, was covered in snow over the weekend, which was gorgeous!

Valentine really enjoyed the conference: “WarMUN was my first conference in person since the pandemic and I enjoyed it a lot” she says. “Meeting new people with the same interests as me and debating with them is so much better in person. I was in the WHO committee, so I debated on very relevant questions. I learned more about Mexico’s health and political system (it was my delegation) as well as the other countries represented in my committee. I enjoyed debating in a small committee like mine because I could raise my point even though I was not a major country. Sometimes in bigger conferences it is harder to get your point across. I also believe that WarMUN was the perfect conference to get back into it. It had been a while since I had done one and the delegates were all very welcoming”.

WarMUN was definitely a highlight of our term and we cannot wait to go to other conferences!

Théophile Bernard is studying for a Politics and International Relations (Bi-diplôme) BA Hons.

Dan, Phillip, Louie, Valentine and Théophile are all members of the MUN society.