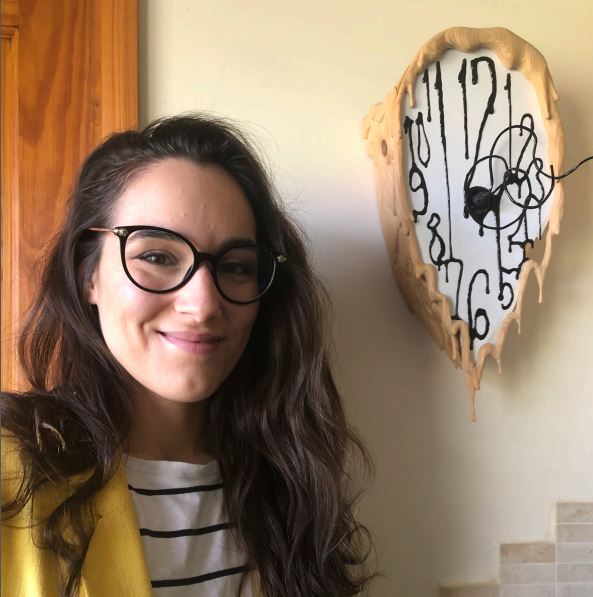 ‘A Schizo-Revolutionary Labial Art-Politics’ has won the Sir Ernest Barker Prize for best doctoral thesis in political theory from the Political Studies Association.

Hollie’s thesis is titled ‘A Schizo-Revolutionary Labial Art-Politics’ and in keeping with the argument of the thesis and Hollie’s artistic practice it was presented as a sculptural piece in its own right.

The thesis was examined by Prof. Rosi Braidotti (Utrecht) and Prof. Maria Drakopoulou (Kent). In the words of Prof. Braidotti: ‘the experimental form as art project is both daring and perfectly attuned to the theme and thus suited to the content matter: a feminist practice of aesthetic and theoretical resistance’. Upon hearing news of the prize, Hollie commented: ‘I’m absolutely delighted to be awarded this prize. It was a huge risk to submit an art-thesis instead of a traditional thesis, and the determination and hard work paid off. Creating an enfolded piece of scholarly writing and a melting sculpture was my feminine reinvention of the traditional idea of a thesis to challenge the hypermasculine systems, structures and content in which theses are written and defended in the discipline of political theory, and being awarded the Sir Ernest Barker Prize from the Political Studies Association confirms that a schizo-revolutionary labial art-politics is a welcomed and timely approach to creatively confront the hypermasculine institutionalisation of knowledge. The experience of the art-thesis also presents a challenge to the reader that was welcomed by Braidotti and Drakopoulou, who both commended it was ‘highly innovative’, ‘highly original’, and ‘more approachable and enjoyable’. It is a pleasure to see that my call for different forms of expression, teaching and learning within political theory is being welcomed and I hope that it invites others to create a much needed space for feminine difference through their own responses to the question of what a schizo-revolutionary labial art-politics might become.’

Nadine Ansorg, Head of School, commented: ‘Hollie’s thesis radically challenges existing notions of how a PhD dissertation might be executed and look like, and fundamentally questions the hypermasculine institutionalisation of knowledge. By way of artistic practice, Hollie provides new ways of a feminine artistic problem of what a thesis may become for generations to come.’

This is the second time in less than 10 years that the prize has come to the School of Politics and International Relations at the University of Kent. The 2013 Sir Ernest Barker Prize was awarded to Dr Benoit Dillet (now, University of Bath) for his thesis ‘The Outside of the Political: Schmitt, Deleuze, Foucault, Descola and the Problem of Travel’, also supervised by Dr Iain MacKenzie.