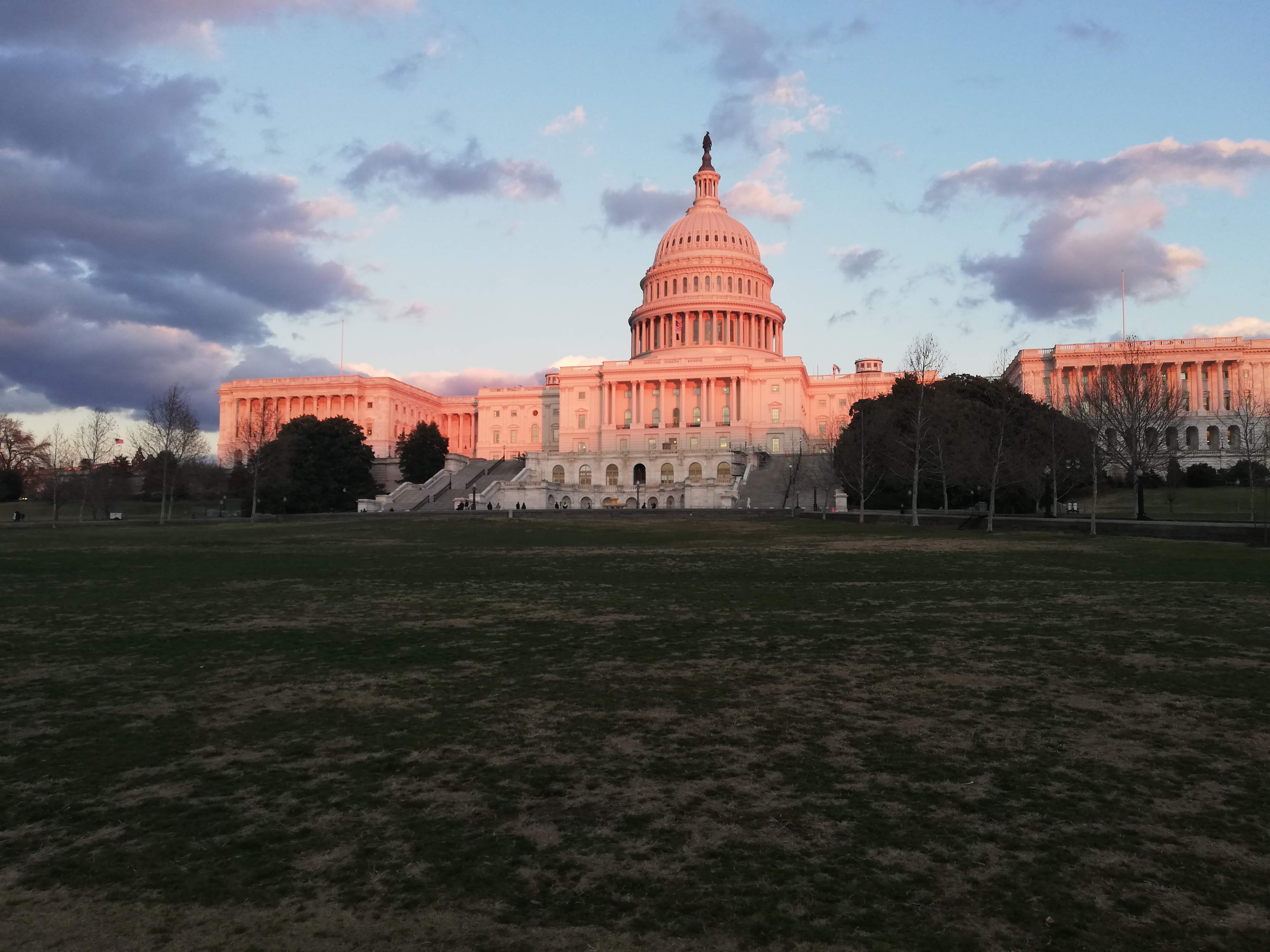 Freddie Mallinson, a 4th year undergraduate in the School of Politics and International Relations, had no idea that his year abroad would lead directly to the heart of U.S. government. He blogs about the experience and his imminent MA in Security Studies at Georgetown University, Washington D.C., in August 2021 for us here.

When filling in my UCAS form, to be honest I wasn’t quite sure how to select my uni. I ended up choosing Kent in part because it had such an attractive year abroad option. I didn’t know where I wanted my degree to take me, but the year abroad option seemed to leave me with the most opportunity to stumble blindly into something I might like. You also need 60% across first and second year to stay on the program which was another fear I had; as someone who’s frequently struggled with mental health and concentration, I wasn’t too great with deadlines, exams, or really most situations with high pressure and high stakes. I’d always loved Politics, but when it came to doing actual work, things were a bit more complicated. My Inclusive Learning Plan (ILP) helped me out immensely here – with everything from counselling to coursework deadline help – and I managed to hit the 60% in First year.

Starting second year, it was time to choose which of the 20 or-so universities across the US and Canada I’d like to crash-land into for third year. I knew I wanted to visit the East Coast, and after about ten minutes of looking at campuses, I chose Virginia Polytechnic Institute and State University in Blacksburg, Virginia, mostly because it had a massive football stadium and nice architecture. To cap it all off, I didn’t even have to pay US fees! Thankfully the universities work that out between themselves so we don’t have to. By May, my place was confirmed! After tearful goodbyes and a long summer, I flew out from Heathrow airport in mid-August, to begin the weirdly early Fall semester at Virginia Tech. During my first term there, I saw a class for Spring term called “Hokies on the Hill” (a “Hokie” is the generic term for a student at Virginia Tech…?) – which from the description seemed a little too good to be true. Instead of my classes at Virginia tech, this class would take up all my time 9-5 for all of Spring, but the University would set me up with an internship in a Congressman’s office! I signed up for the required interview, and a few weeks after vomiting out all I could remember about Virginia politics having Googled it the hour before, the program director told me that I would be going to Washington for the Spring semester, undertaking an internship in the office of Senator Tim Kaine of Virginia.

After subletting my apartment in Blacksburg and going home for Christmas, I moved into Washington in January and turned up in Russell Senate Office building at 9AM for my first day on the job.

That afternoon, Donald Trump’s (first) impeachment trial started, and, still convinced I was dreaming, I was given the office pass to go and watch three hours of the Senate arguments for and against removing the 45th President of the United States from office. The trial went late, and I got home from my first day after midnight, and not quite for the same reason I was used to in most of student life. The rest of my internship and experience in D.C. (cut short by two months, cheers covid) was just as surreal. I spent the days being shouted at on the phones by angry Republicans, furious over my Senator’s (thankfully a Democrat) vote on an abortion, gun control, civil rights or healthcare issue; the nights were meeting and socialising with some of the brightest and most dedicated people I had ever come across. Everyone was an activist. I’d seen enough; I knew it was where I wanted to be so as soon as my flight landed in the UK, on the same day Boris announced our first lockdown, I started looking at Master’s programs at Universities in D.C. Fast forward another year, with the references from my teachers at Kent and the job I’d managed to talk my way into during my year abroad, Georgetown University offered me a scholarship to study an M.A. in Security Studies.

Having dropped out of A-levels once before trying again and getting into Kent, this was never, in any wildest dream, where I thought this degree would take me. I would not have believed that a university in rural Virginia, one I had not heard of before I signed up to study there mostly because I liked the old buildings, would send me to work in a place I always assumed was a million miles out of my reach. I would not have believed a lot of things about where my degree at Kent eventually ended up, but I know now that opportunities like these are just as precious as they are rare, and that saying ‘yes’, even when I’m not entirely sure (or have absolutely no clue) what I’m looking for, is the only way to end up somewhere I love.