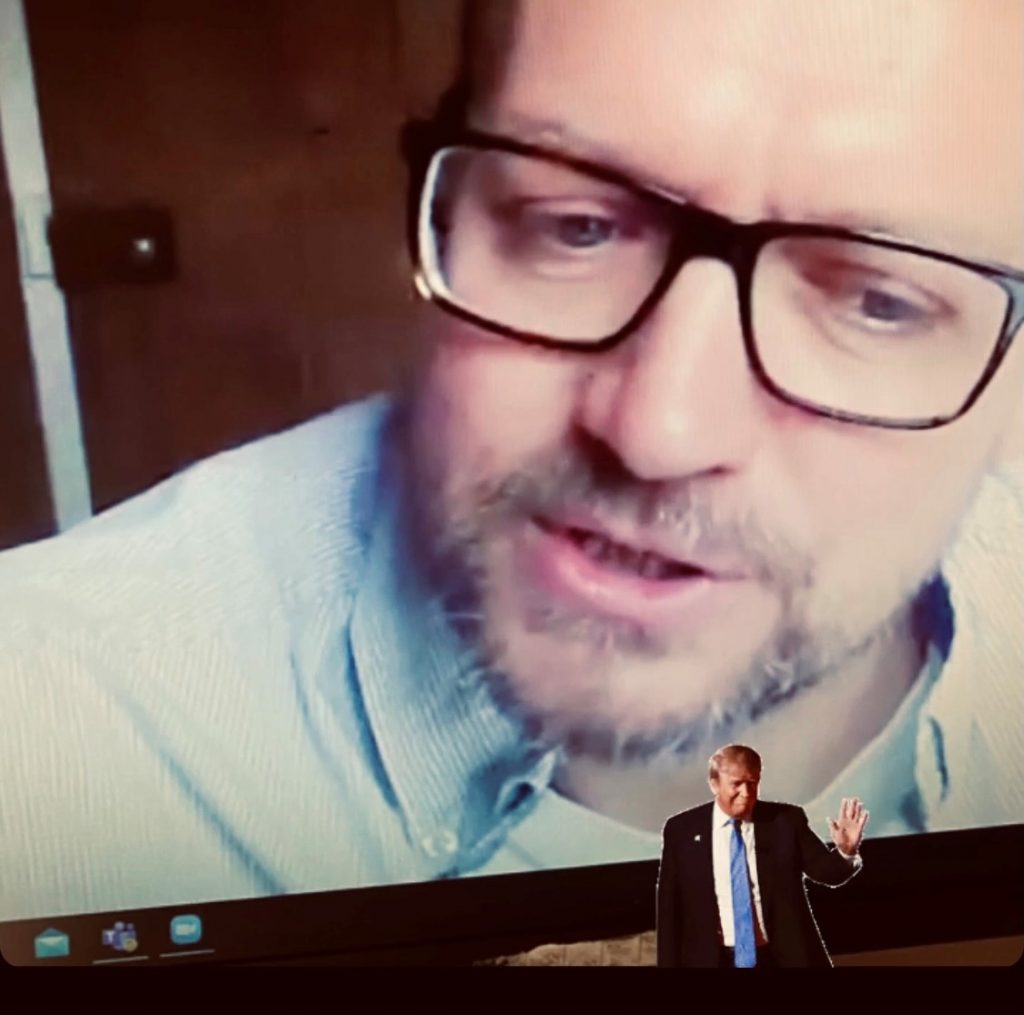 Dr Andrew Wroe, Senior Lecturer in American Politics and author of The Ordinary Presidency of Donald J. Trump. commented on President Trump finally conceding to President Elect Biden on BBC Radio Kent, 24.11.20, providing some interesting insight into Trump’s character as well as the behind the scenes practicalities of he handover of the administration between now and Biden’s inaugeration in January 2021. What follows is a transcript.

Dr Andrew Wroe is from the University of Kent’s School of Politics and International Relations and is on the line to us now. Andrew, afternoon to you. How significant is this acceptance by Donald Trump that a formal transition of power can now begin?
Oh I think it’s hugely significant. It releases a big tranche of money – roughly about 7 million dollars – for the Biden campaign to start to subsidise their office space, it will actually provide some federal office space as well, and it’ll give President Biden – or sorry, President Elect Biden – access to security briefings . I think that’s something that was really worrying Republicans up on Capitol Hill, especially Senate Republicans, that as they try and brand themselves as the party of security that promotes America’s national interest it didn’t look very good for this president – the current president – not allowing the incoming president access to those really important security briefings. It’ll also give Biden and his team access to the rest of the federal bureaucracy, they can send their people in there and can start to liaise with Trump’s people. Trump’s people have been compiling what are called transition binders where they identify the problems and the issues that the Biden people will have to deal with when they hit the ground running. It’s really the transition that decides the point. The transition’s really about the Biden administration coming in and hitting the ground running on January 20 2021.

Although it ought to be pointed out, President Trump stopped short of conceding defeat, didn’t he?
He did. I don’t think he will concede. It’s just not in his nature. In fact he said in a tweet, I think it was this morning or last night, that ‘Our case continues strongly’, they’re going to continue to push the argument in the courts, and in the court of public opinion as well, that this election has been stolen. And I think it’s really important for Trump’s own mental health in a way that he doesn’t concede, because his whole persona is built around being a winner rather than a loser, and if he concedes he’s officially saying to the world ‘I lost’. By not conceding, and spinning this simply false argument that the election was stolen by Biden, he allows the transition but he maintains that he’s not a loser, and he’s not a loser because the election was stolen.

And in a tweet Mr Trump said he still believed he’d prevail in his legal fight to overturn the election result. How likely is that in reality?
Almost zero. There’s been over a dozen efforts in the courts and various states to turn this around and not a single case has succeeded, they’ve been thrown out at every point, basically because the courts require empirical evidence and the Trump lawyers have not been able to provide any evidence that the election has been stolen by the Democrats, that there’s been a huge fraud by the Democrats and the Biden team. I mean, there isn’t simply any evidence, and that’s why the courts have given his legal efforts very short shrift. There was an absolutely excoriating opinion over the weekend from a judge in Pennsylvania where he described Giuliani and the other Trump lawyers’ efforts like a Frankenstein’s monster, this sort of stitched together ridiculous effort to persuade the Pennsylvania judge to throw out 7 million legal votes because they’d identified a couple which were slightly dodgy. The judge just sort of threw it out in this really brutal opinion, and I think that really deflated the Trump campaign and the Trump lawyers. It wasn’t the end, it’s not the end of the story, I think they’ll sort of go through the motions, but that opinion on Saturday was just brutal for them.

And Donald Trump has been unusually quiet these past few days, so – is he simply keeping his head down, do you think?
He’s still tweeting, that hasn’t stopped. He’s doing a lot of golfing these days. But what I’ve been reading is that he’s angry about what’s happened, he’s venting, he’s blaming others, including supporters, like Fox News. He’s looking around for scapegoats. But going back to this point I made earlier about him having an image of a winner, it’s really hard for him to hold his head up now and say that. I think he is hiding because he has lost and he can’t really deal very well with loss.

So what happens now during this transition period? What’s going on behind the scenes, Andrew?
Well, as we said, the Biden team will start to get access to the resources of the Federal Government. They’ll start to get security briefings and so on, but procedurally there are still a couple of steps that have to – or hoops they have to jump through before Biden becomes President. So each of the individual states is in a process of certifying the election results in their state, and different states do that at different times. Michigan did that yesterday, for example, and, you know, this will go on for the next week or so. Then the next big step is December 14 and – we talk about the Electoral College, you know, there’s 538 Electoral College votes. Well each of those votes is actually represented by a real person, and so those real people will actually formally cast their vote in favour of one candidate or the other on 14 December. And that’s what Trump was trying to upset – what he was trying to do was get the state legislatures to overturn the Electoral College, give their Electoral College votes directly to him, so by-pass that process, and that seems to have failed as well. So for 14 December the Electoral College voters will come together and they will cast their votes for Trump or Biden, and we know that those votes are going to go for Biden in the main, it’ll be a healthy victory. But there’s another formal step after that, 6 January. Those Electoral College votes are transmitted to Congress in Washington and Congress formally counts the votes, and then two weeks later, on 20 January, Mr Biden will be sworn in as the President of the United States.

Dr Andrew Wroe is a Senior lecturer in American politics. His current research interest is the presidency of Donald J. Trump.