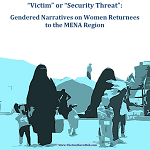 In her paper published on the NATO Southern Hub, Harmonie Toros examines the complex question of the Foreign Terrorist Fighters and their families returning from areas once controlled by DAESH, which is a high priority policy area for NATO members and its partners, particularly in the South. Indeed, although much international attention has focused on those returning to Europe, the question of returnees is central to many countries in the MENA region with thousands of fighters and family members still in prisons, detention centers, or in camps in Syria, Iraq and Libya. Simultaneously, increasing attention has been given to the importance of narratives and counter-narratives in countering violent extremism – and nowhere has this been clearer than in the fight against DAESH.