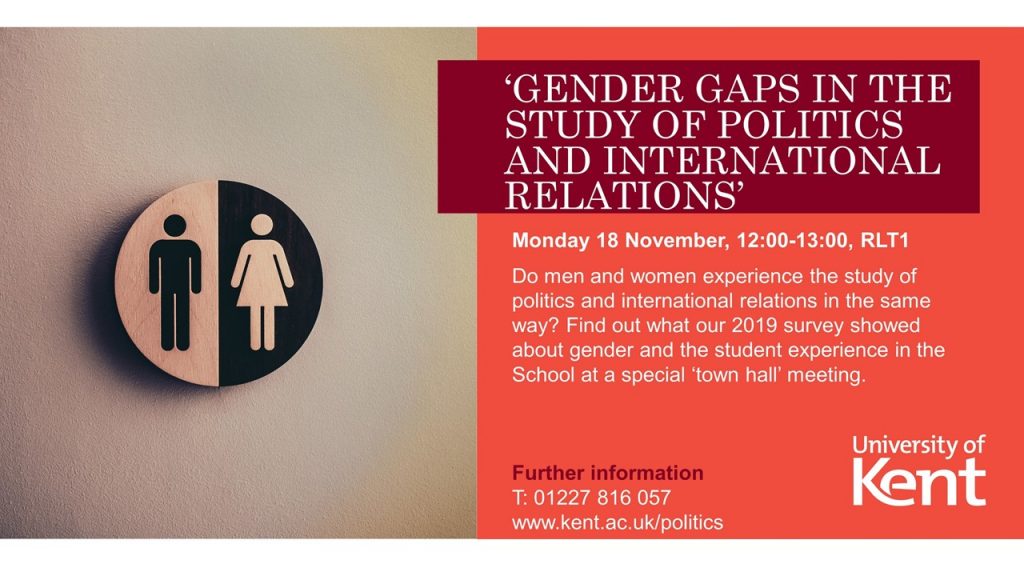 On 18 November, the School of Politics and International Relations held a ‘town hall’ meeting with students and staff to discuss the topic of gender gaps in the study of politics and international relations. The discussion was led by Professor Adrian Pabst, Head of School, and Dr Andrea den Boer, who researches gender in international relations. Professor Pabst explained that the School is committed to principles of equality and inclusivity, and that we are currently working towards membership of the Higher Education Athena SWAN Charter, which is awarded to Schools and Universities in recognition of good gender equality practices.

Dr den Boer presented the results of a student gender culture survey conducted in April 2019, which identified an overall gender equitable picture of the School (92% of females and 95% of males surveyed stated that academic staff treat both female and male students with equal respect) but also pointed to some areas in which male and female students have different experiences. Students and staff discussed the survey question regarding male and female opportunities to take the lead in seminars in which 27% of females and 9% of males indicated that male students are more likely to take the lead in seminars. Those present at the meeting also discussed broader questions of gender equality, including what to do if students encounter discrimination, bullying, or harassment (noting that the first point of contact should be the School’s student support team). If anyone has any questions about the survey, or would like to discuss issues of gender equality in the School, they are welcome to get in touch with Dr den Boer, who is currently leading the School’s Athena SWAN self-assessment team.