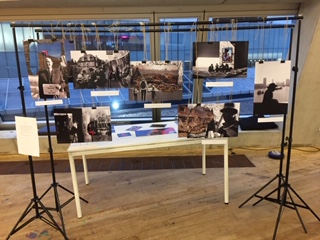 Students from the School of Politics and International Relations took over Tate Exchange at Tate Modern, last weekend (March 16/17), with a series of inventive and inspiring projects aimed at engaging the public in the idea of movement and resistance.

Activities included transforming big business advertising into origami birds; film work on borders, mental health and how people have responded to racism in sport; interactive image work on media representations of gender and politics, body positivity, the meaning of change, the relationship between art, politics, education and Brexit, and the nature of disagreement and conflict; performance work on identity politics; and an immersive experience in a pod exploring the connection between choice and resistance. There were also 2,000 dominoes used to create some amazing constructions and, with some effort, the word ‘move’ in the form of a domino run. This is the third year of the School’s involvement in the Tate Exchange project but the first time the whole floor – Level 5 of the Blavatnik Building – has been activated and animated entirely by the students. With over 1,000 visitors in two days, the students had a wonderful range of conversations with members of the public. As one visitor put it, ‘this is great, such amazing work!’