Cressida Williams (Canterbury Cathedral Library) introduced the workshop by discussing how the acquisition of the Canterbury Trussel Bible (now Lyghfield Bible) was achieved. The Lyghfield Bible was spotted in an auction catalogue and acquired with the help of a private donation and a six-figure donation from the National Heritage Memorial Fund. Dr. Alison Ray (Canterbury Cathedral Library), Dr. Emily Guerry (University of Kent), and Dr. David Rundle (University of Kent) placed the Lyghfield Bible into the context of book production in Paris by examining its illumination, illustrations, and marginalia.

Book production in Paris was centred on the studies that took place at universities such as the arts, theology, and scripture. Both secular and vernacular texts were created alongside the sacred and Latin texts. Additionally, people began to desire ‘pocket bibles’ similar to that of the Lyghfield Bible. In terms of illumination and illustration, the Lyghfield Bible was similar to other manuscripts produced in Paris. These other manuscripts seem to have been created by the Johannes Grusch Atelier. This group of artists created manuscripts in short periods of time by following a template that the artists knew would look aesthetically pleasing. The shared characteristic between the Lyghfield Bible and these other Grusch Atelier manuscripts included flat figures, C-shaped chins, and thick, spaghetti curls for hair. The marginalia provided in the Lyghfield Bible should provide information about previous owners and dating when it was in someone’s possession. What the marginalia does provide, however, is evidence of how it can misdirect us: early modern hands add a date of writing of 1353 and this has been thought to be based on an inscription that ends with ‘Aug.’ and a set of figures which have been read as a date. In fact, the inscription is a quotation from a work of Augustine, and the following figures a citation – there is no date there, and no basis for the claim elsewhere that it was produced in 1353. More work needs to be done to gain a complete understanding of the production and history of the Lyghfield Bible.

In the second session, Dr. Emily Corran (University of Oxford/University College London), Dr. Claire Bartram (Christ Church Canterbury University), and Dr. Eyal Poleg (Queen Mary University of London) examined the study of bibles and book culture in Canterbury. The study of bibles was inspired by the Parisian approach to education, so to read the book, people had to read both the actual text on the page as well as interpreting its spiritual meaning. While the text provided an understanding of biblical characters, events, and what people thought, the spiritual meaning provided theology and morality.

To obtain bibles as well as other books, markets were used to transmit information. People could own books, copy them, and trade them with other people. In Canterbury alone, there were 200 shops with various trades and workers. Some of these various shops enhanced book culture through the production of books. Looking at bibles, there is a typical layout which is also shared by the Lyghfield Bible. Every point is connected and is divided using chapter divisions. For the Lyghfield Bible, there is plenty of space for marginalia, but there is little evidence of annotations in the text. On the back flyleaf, there is a liturgical calendar paired with a list of biblical readings. To conclude, the Lyghfield Bible was used for individual use rather than public lectures. Despite the interest in bible study and book culture, readers did not leave many annotations in the Lyghfield Bible although there was space to do so. 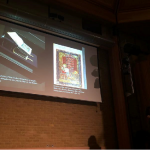 The day culminated with a public lecture by Dr. Alixe Bovey, ‘Illuminating the Bible in Medieval Canterbury.’ Held in the Claggett Auditorium at the Canterbury Cathedral Lodge, Dr. Bovey’s lecture did not seem to have an empty seat in the room. In her lecture, Dr. Bovey examined Canterbury’s exchange of information through people and books, the sense of material culture which existed in the bible by using translations of text, images, stained glass, etc., and the concept of scale. To examine these themes further, Dr. Bovey incorporated various manuscripts that were recently featured in the British Library’s Anglo-Saxon Kingdoms exhibition such as the Codex Amiatinus, the Paris Psalter, and the Utrecht Psalter to name a few.

Throughout her lecture, attendees were told about the exchange of books and ideas between Canterbury and various other areas of Europe. In the case of material culture, by examining the Utrecht Psalter, Harley Psalter, and Eadwine Psalter similarities are shared between all three in the form of illustrations. Additionally, in the Eadwine Psalter, there are various Latin versions as well as Old English and Anglo-Norman French translations.

Lastly, scale was examined by including images of the manuscripts alongside her ruler. Dr. Bovey showed the evolution of scale for bibles starting with the notably large Codex Amiatinus to the ‘pocket-sized’ Lyghfield Bible. To conclude, Dr. Bovey made the same statements about the Lyghfield Bible that were made during the day’s earlier sessions such as its origins, similarities in illumination with other Johannes Grusch manuscripts, and that more is to be learned about its production. Dr. Alixe Bovey’s lecture was received well and was followed by a wine reception to celebrate the event.

This workshop has proved to be exciting for both the Canterbury Cathedral and MEMS at the University of Kent. The speakers provided insights on the future work that can be done on the Lyghfield Bible to be able to fully understand its production, contents, and history over time. Since the acquisition of the Lyghfield Bible, work has been completed to understand a small bit of its production and history. Now students, lecturers, and professionals can continue studying the Lyghfield Bible in its entirety. Additionally, what this workshop provided was insights into the work that can be done for manuscripts in general.