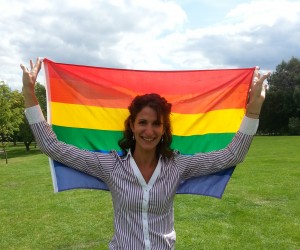 Interesting fact: I love to cartwheel!

I would like to be a part of the change in the world that eradicates fear and brings awareness, equality and respect for everyone.

When did you join the University and what is your role?

I joined the University in 2012, working for Kent Innovation & Enterprise, and moved to Student Services in January 2014. After returning from maternity leave in 2016, I joined Student Support and Wellbeing in a part-time Projects Officer post, which I’m really enjoying because it involves organizing transition support for various student groups and some events and awareness raising campaigns in the fields of Disability and Mental Health and Wellbeing.  I previously worked as an English teacher abroad, and then for 2 big events companies in the UK, so coming to work at the University of Kent was a welcome change of pace and surroundings. My previous roles had been rewarding but quite isolating, working in competitive environments where you had to shout to be heard and fit the expected mold to gain respect. I’m really happy to be working here because I think the atmosphere at the University of Kent is overall a very positive and inclusive one, where diversity is celebrated and all types of people and personalities are valued just as they are.

Why do you want to be a straight ally?

I want to be a straight ally as I know from friends and family members that coming out or being out in the workplace can be difficult – and it just shouldn’t be. We are all here to work together to enable the university to operate successfully, and we bring not only our particular interests, talents and skill sets, but also our backgrounds and who we are. I strongly believe in equality and I think it’s up to absolutely everyone to foster a fair and safe working environment for ourselves and for each other.

Why should straight people be involved in LGBT issues? 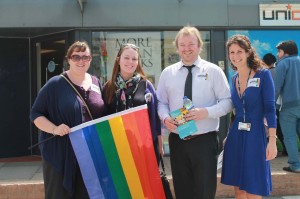 Natalia (right) with colleagues on International Day Against Homophobia and Transphobia (IDAHOT) 2014 at the center of the Canterbury campus.

Why should we care about the political situation in the Middle East? Or impoverished communities in the UK? Or that in many countries in the world, women are being treated unfairly and denied education? Because we’re human, and we’re all connected, and injustice to one person affects all of us. I think as a straight person living in modern-day England, it’s easy to think of issues of discrimination against LGBT people being in the past, and pretend that today society is more open and we know better. But I realize this is slightly idealistic, and I think by listening to each other, being aware of possible issues and promoting a positive, open and fair stance, we can make sure we are all working towards a world were discrimination will truly be a thing of the past.

What would you like to tell other staff at Kent who may be facing difficulties regarding their LGBT status at work or who are finding it difficult to come out at work?

You could contact one of our LGBT Staff Role Models and see if you can speak to them about your particular situation to help you think through it. You can know that although it may be a quiet one, there is a large population of your colleagues here at Kent who will support you, and that the University has a lot of measures in place to promote Equality, Diversity and Inclusivity, so you do not have to tolerate discrimination. For more advice you could consult the contacts section on the LGBT Staff Network blog: https://blogs.kent.ac.uk/lgbtstaff/contact-us/

What can straight allies do?

Straight allies can be an example of equality – each of us has an influence in our working environment, and we can be brave and speak up if we perceive any unfair treatment, whether it be inappropriate jokes or not being inclusive. I would encourage other colleagues to get involved and visibly stand up against discrimination – for example by promoting LGBT events to their colleagues and joining in conversations about them in a positive way. I enjoyed helping at the International Day Against Homophobia & Transphobia 2014, I was really encouraged that so many people were happy to wear an ‘I’m against Homophobia and Transphobia @ Kent’ sticker – what a powerful message of solidarity moving around campus!

Do you have any LGBT friends or family members or experiences that have shaped your interest in being a straight ally?

My eldest brother came out to our (religious and fairly sheltered) family when he was 19 and I was 15, and to be honest we were shocked and knew very little about what it had been like for him to grow up knowing he was gay. He was the first gay person I’d ever known. Mostly I remember my other brother and I being absolutely distraught that he’d felt he had to hide from us for years and that we hadn’t been able to support him through some really difficult times, simply because we had no idea what internal and external battles he’d been fighting. I think a lot of discrimination is really just fear: fear of the unknown. Now that his partner has been part of our family for longer than my husband, it seems strange to look back on that time and see how different our perceptions were then of LGBT issues – just because we were ignorant. I’m so glad that our society has come a really long way in promoting LGBT issues during the intervening decade and a bit, but unfortunately ignorance and prejudice still exist, and I would like to be a part of the change in the world that eradicates fear and brings awareness, equality and respect for everyone.

What can we all do to make Kent a better place for being an LGBT Staff member?

We can be open and honest, we can take care to communicate in a non-judgmental way so that people feel free to be themselves around us. If colleagues use derogatory language or behave in a way that is not inclusive, we can bring it to their attention and ask them to modify their behaviour for the sake of a peaceful, fair and friendly working environment.