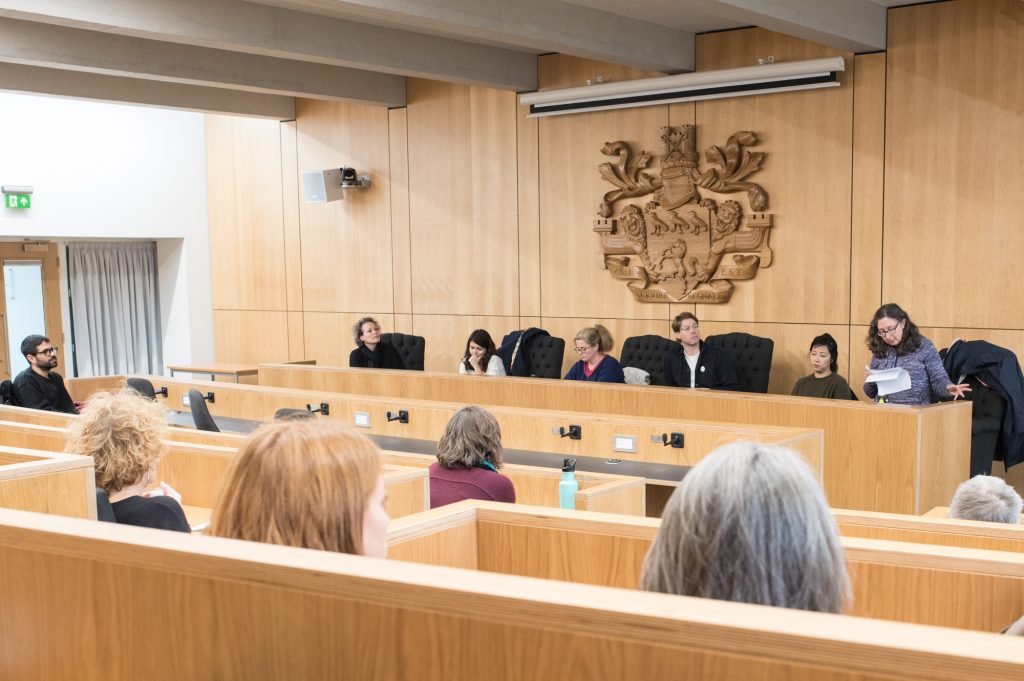 An innovative workshop on interdisciplinarity at Kent Law School highlighted the extent to which academics “stretch and perforate the boundaries of Law as a discipline.”

The workshop, entitled ‘At the crossroads of humanities and social sciences: methodological questions and conversations,’ showcased the diverse methods and processes that academics adopt when approaching research questions.

A panel of six academics from the Law School were each asked to speak for ten minutes on how they might approach the task of writing a paper for an edited collection entitled ‘Bodies’. Their responses (summarised in more detail below) revealed how academics were either ‘task’ focused, ‘problem’ focused or ‘concept’ focused. Several admitted to finding the process of research ‘painful’ but all agreed on the importance of self-awareness (and that they were conscious of their own ‘place’ in the process.) Some academics said they were concerned with how law impacts on people (and on tracing that concern historically) whilst others said they were concerned with the question of how do we know what law is (or how do we know what we think we know about law or people).

Professor Didi Herman, the Research Excellence Framework (REF) Co-ordinator for the School, devised the workshop as a focus on the process rather than the content of research undertaken at Kent Law School. She said: ‘We hoped to highlight how Kent Law School is a leading centre of critical interdisciplinarity, meaning that we don’t just add a discipline ‘to law’ (ie Law and ….). Many of our scholars exist at the crossroads of various humanities and social science disciplines, and are re-imagining and creating new approaches to research.’

The workshop succeeded in stimulating engaging debate and discussion which Professor Herman said revealed “just how far our colleagues stretch and perforate the boundaries of Law as a discipline.”

Professor Carr said she tended to approach a research topic or task by starting with her own experience so in this case, would think about her work as a housing tribunal judge concerned with poor peoples’ housing conditions:

Professor Cloatre said she would see herself as coming to the task from the perspective of her research focus on issues at the crossroad between law and medicine:

Dr Haslam said she would think about the task from the perspective of work that she’s recently been doing in historical archives on slavery and abolition:

Dr Kang said she would begin by wanting to know about the edited book: who are the editors? What is the context of the collection? How free is she to write what she wants or is there an agenda/theme for the book she needs to conform to?

Dr Parsley said his first questions would be: can I make an original contribution to this book by drawing on my existing research projects? As we all have limited time, what do I want to put out into the world on this topic, what do I want to make?

Professor Perry-Kessaris said her starting point would usually be in asking how to make things visible/tangible?