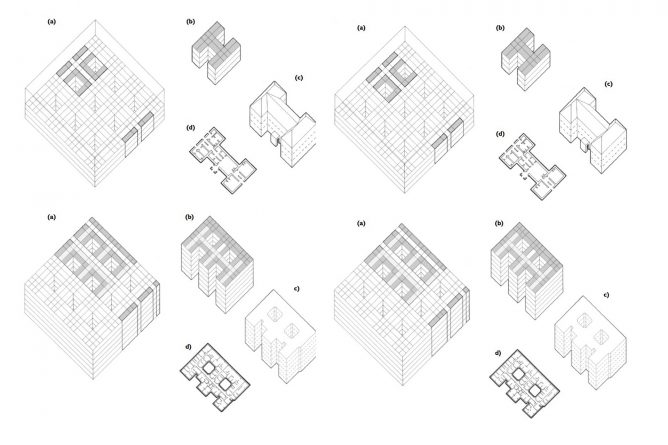 This week’s Digital Architecture Open Lecture will be given by Philip Steadman from the Bartlett Faculty of the Built Environment at UCL. His lecture entitled, ‘Worlds of possible plans and built forms’ will be held in Marlowe Lecture Theatre 1 on Thursday 1st February 2018 at 6PM.

The lecture will describe methods for enumerating and cataloguing certain classes of plans and built forms exhaustively. These are rectangular plans with small numbers of rooms; and more complex rectangular built forms, described in terms of zones. The designs are laid out in what biologists call morphospaces: theoretical worlds of possible forms. Historical building types are shown to occupy particular areas within these worlds, because of their generic geometrical character. The purpose is not so much to provide a design method, as to give a strategic overview of the ranges of choice open to architects in design.

Philip Steadman is Emeritus Professor of Urban and Built Form Studies at the Bartlett School, University College London, and a Senior Research Associate at the UCL Energy Institute. His main research interests are in the geometry of buildings and cities, and their use of energy. With colleagues he is currently building a 3D model of the UK building stock, for use in energy analysis. He has published three books on geometry and architecture: The Geometry of Environment (with Lionel March, 1971), Architectural Morphology (1983) and Why Are Most Buildings Rectangular? (2017). His study of The Evolution of Designs: Biological Analogy in Architecture and the Applied Arts appeared in 1979 and was republished in 2008. Vermeer’s Camera, his investigation of the Dutch painter’s use of optical aids, came out in 2001. In 2014 he published a book about building types, considered from both historical and geometrical points of view, with the title Building Types and Built Forms. He is currently working on Renaissance Fun: The Machines Behind the Scenes (2020?). 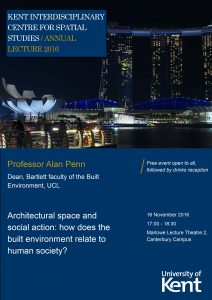 There has been a ‘spatial turn’ in many disciplines, with spatial analytical techniques and spatial theories becoming central to many research programmes and initiatives. The Kent Interdisciplinary Centre for Spatial Studies (KISS) is envisaged to be a UK research-leader in Interdisciplinary Spatial Studies in the Social Sciences and Humanities. KISS builds on strong in-house expertise that spans across the Faculties of Humanities and Social Sciences and across campuses.

This year’s KISS Annual Lecture 2016 will be given by Professor Alan Penn, Dean at Bartlett Faculty of the Built Environment, UCL. His talk, entitled ‘Architectural space and social action: how does the built environment relate to human society?’ will be held in Marlowe Lecture Theatre 2 at 17.00 on Wednesday 16th November 2016.