In its 9th year of running, Kent School of Architecture has gone from strength to strength through its dedication and hard work of both staff and students. The End of Year Show 2014 certainly was a spectacular culmination of the projects the students had been working on during the academic year, leaving staff humble with pride after the amount of support they had been giving the students throughout the year. And what better way to make a statement than the BFA (‘Big Friendly Arrow’) hanging from one of the cranes originally being used during the current construction of the Templeman Library extension! Anyone else around campus who would approach the arrow outside the Marlowe Building would definitely then brace themselves for an exhibition that opens its doors with brimming confidence and finesse. An initial thank you must be extended to the workshop team, Kevin Smith and Colin Cresser, and any volunteers who helped assemble the BFA. It should also be noted that Kevin and Colin had worked tirelessly to put together many of the plinths and other woodwork that made up a lot of the exhibition layouts. The students are certainly grateful for their contribution. 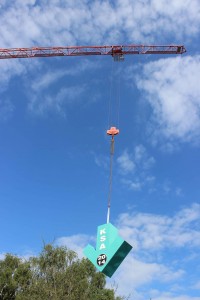 As the numbers of guests gathered in bulks on the opening evening held on Friday 20th June, Professor Don Gray, Head of School, conducted his introductory speech and distribution of special awards given to students. Amongst these announcements, it is with pleasure to announce that Dr. Timothy Brittain-Catlin (Senior Lecturer & Director of Graduate Studies) has been promoted to Reader, especially after the success of his recently released book ‘Bleak Houses: Towards a Theory of Failure, Architectural History and its Losers’. The student awards are as follows; for which KSA extends their congratulations:

The Undergraduate exhibition (Stage 1 in part of Studio C downstairs, Stage 2 in the Marlowe Foyer & Stage 3 in the Digitial Crit Space upstairs) was an impressive display of students starting out their journey in architecture and a pleasing reflection on what they had achieved so far, in terms of acquiring new skills and taking on challenging projects. The Stage 3 projects included Modular (Canterbury student accommodation masterplans) and Urban (School of Arts building proposals based in Rochester). The combination of physical models, drawings and utilisation of 3D BIM software was a perfect example of how the students were making the most of the development of their projects and help prepare their first professional architectural portfolios. 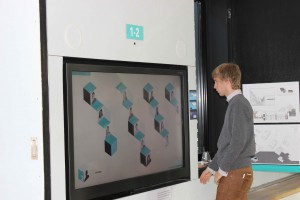 The MArch exhibition was held in Studio C downstairs and immediately paved the setting for a unit system that created sheer diversity via the range of projects. Unit 1 (led by Michael Richards & Michael Holms Coats) looked at ‘Cinque Ports’: the coastal cities of Kent and it was this space where visitors were greeted by a sea (no pun intended) of delicate, intricate models in the middle of the space, to show these students had thought carefully about how they physically built up their schemes. Unit 2 (led by Ed Holloway & Peter Ayres) looked at the Isle of Portland and the importance of Portland stone. It was interesting to see how the students could take one material and use it to tell a story within their schemes. Unit 3 (led by Corinna Dean & Diana Cochrane) looked at the urban infrastructure and cultural language of Istanbul, Turkey. There was a real burst of culture in the space with a video showreel of observations in Istanbul, as well as a lot of rapid documentation on how the schemes could help the Turkish community. Finally, Unit 4 (led by Shaun Murray & Yorgos Liozos) looked at Canvey Island near Leigh-on-Sea, before designing pioneering villages that reformulate environmental issues. The technical approaches by the students were so bold and complex, very large areas of landscape and topography were shaped and reformed too.

Kent School of Architecture are privileged and grateful for everyone who has been involved with arranging the exhibition; all students who selected work and curated the spaces, as well as academic, administration and workshop staff who all provided exceptional help to the students during the course of the year and leading up to the end of term. The success of the exhibition and the beautifully put together catalogue would not all have been possible without the main co-ordinators, Stage 5 students Rosie Seaman and Peter Evans. Many thanks to the committee and helpers who assisted Rosie and Peter with all the arrangements.

Until next academic year, we wish everyone a wonderful summer and we look forward to our upcoming 10th Year Anniversary, as well as the University of Kent’s 50th Anniversary in 2015.