Good architects should all be conservationists. As architects, we understand the vital importance of context. Unlike artists, architects never initiate a design process with a blank canvas. Good design is always informed. Architecture is possibly the only profession that create its own problems and solutions.

To clarify, conservation does not necessarily require a conservative approach. To take a conservationist approach is to first recognise the existing value, past value, then to try and preserve those values whilst making appropriate additions to create future value.

Let’s begin with recognition. What do we mean by value? How does anyone identify something worth protecting? The answer may be found in the, somewhat snobbish, words of John Ruskin, “Any work, over which educated, artistic people would think it worthwhile to argue at all”. Today, we may expand on this notion by including disciplines other than cultural, to include social and environmental aspects as well. Much like Max Dvorak’s “conservation not restoration”, Ruskin makes a clear distinction between restoration and repair. In the views of Ruskin, to restore is not only destructive, but it is completely impossible. For any new rendition, no matter how accurate, ‘is a false description of the thing destroyed’. To Ruskin, value extends beyond form to the very matter which created form itself; new stones do not equate to the work of old craftsman. 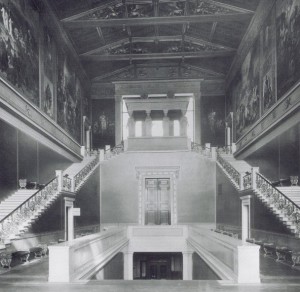 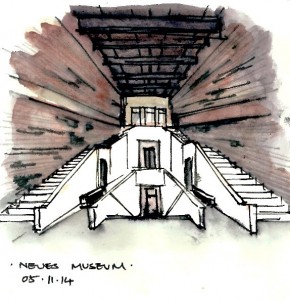 This conservative approach is not always practical however, as in the case of the Neues Museum, Berlin. Cue sensitive conservation. The aftermath of WWII and soviet occupation left the building in ruins and not much to be conserved. David Chipperfied recognised the past value of the very matter that made up the ruin itself and the current value of the wrecked form of the former building as a reminder of the historical event of war. He also recognised the future value in restoring the building for use by the general public as a museum once again. The building was sensitively restored. Instead of a complete restoration, the new elements were muted interpretations of the original. This way the building managed to maintain the scars from war as well as embracing restored volume.

But what if none of the original building envelope exists?

In July 1902, San Marco Campanile, Venice, collapsed completely. The decision was taken to entirely rebuild the tower using the same materials and method as prior to the incident. The justification in this case is that the symbolic value of the bell tower is integral to the identity of St Mark’s and the square which cannot be sensibly represented in the form of the rubble that remained, thus it had to be rebuilt. In fact this is not the first time that the Campanile has been restored. It went through multiple restorations to finally resume its current shape in 1511 with minor alterations up until then. The tower today is able to symbolically retain its past even if it may not be physically authentic.

In one example, symbolical value is placed above physical value. Ise Grand Shrine, Japan, is rebuilt every twenty years alternating between two sites. While on the surface, this may seem to be counter intuitive when it comes to conservation. However, the rebuilding serves as a way of passing building techniques from one generation to the next. The shrine is rebuilt with exactly the same materials, dimensions and methodology. Matter is not conserved here but cultural, historical and social heritage are definitely preserved.

Today we must recognise the importance of the existing cultural, historical, social and environmental heritage. Architects mustn’t brashly design for tomorrow without any regards for the past. Equally it seems irresponsible not to contribute anything for future generations. We must take responsibility for our legacy and do so by being good conservationists.

Imagine that in front of you stood a door, and I told you that on passing through this door you would be transported 160 million year into the past to the age of dinosaurs, you would say that I have lost my mind wouldn’t you? However, Renzo Piano would disagree with you, and so would I.

I have always been fascinated by immersive experiences, the Eden project in Cornwall being a fine example, and it would seem that one of the aspects which make them so enchanting is their collaboration with superlative architecture and interior design. The Eden project consist of two vast biomes designed using the concept of bio-mimicry which gives them their distinct bubble shape. This focus on bio-mimicry has facilitated a huge saving in weight and cost due to resource efficiency, in fact the resulting superstructure of the biomes weigh less than the air they contain. Because of the lightweight nature of the ETFE membrane used to create the hexagonal panels, the steel frame was therefore smaller meaning that the resulting structure as a whole let more light in. When viewed from the ground, amidst the dense rainforest and humid air, the relative ease in which your mind gets lost in this enchanting world is astonishing. The only reminder of the outside world coming when your eye is drawn upwards by the towering trees to a gap in the canopy which shows a fanciful hexagonal pattern soaring above you, for some reason the Hunger Games springs to mind.

When people ask me what form truly brilliant architecture comes in I tell them that for a piece of architecture to be truly brilliant, the form which it assumes is extraneous, more importantly therefore is a buildings ability to invoke emotion and feeling; something which when done well can have a profoundly personal effect on those who visit it. Which is partly the reason why I believe architects such as Daniel Libeskind have received so much recognition for buildings such as the Jewish museum in Berlin, a building which cannot possibly be understood from its external appearance, but by the ineluctable emotional connection with the buildings interior spaces. In my opinion a utilitarian building designed solely for either financial or practical reasons cannot possibly be classed as architecture, this distinction should be reserved for buildings which are designed with the primary intention of provoking feelings in those who visit them. This is the reason for my appreciation of immersive architecture. 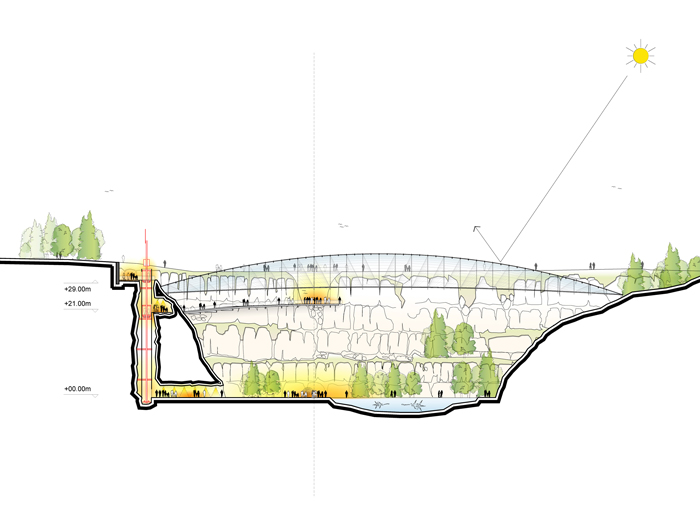 Saying this, due for completion in 2021 is what will be the worlds largest immersive Jurassic experience, known as ‘Jurassica’, designed by Renzo Piano. Unlike the Eden project, the environment contained within this space is not a replica of an already existing global ecosystem, but a replica of an ecosystem unfamiliar to the human race, that of the Jurassic period. A huge roof structure will cover a 250,000 cubic metre quarry in Portland England, and beneath this roof will exist a Jurassic world complete with animatronic moving replicas of the fauna from this period, on both land and in water. The location of Jurassica will be ideally located in close proximity to the Jurassic coastline, a place where much of the research and collection of prehistoric fossils currently operates, and will provide a much needed visual aid to assist in the education and experience of this fascinating period of time. 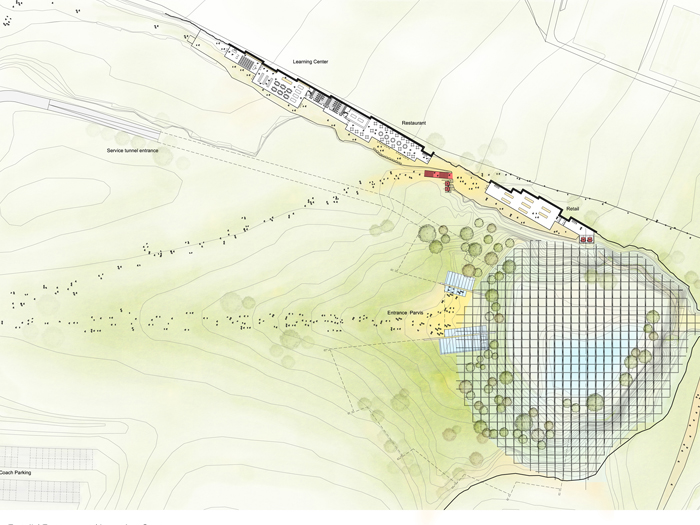 The aim of the project is to not only to create the largest Jurassic experience, but to ensure that it is also the most accurate representation of this long lost time. The project has already attracted many distinguished figures in support such as Sir David Attenborough.

Immersive architectural environments can be very easy to achieve on a small scale, it is however far more difficult to achieve on a larger scale. The Eden project is a fine example of how immersive environments can be extremely captivating places to experience because the architectural forms employed are intended to focus our attention on their contents, while producing an external appearance which draws us in. Jurassica certainly seems to tick all of the boxes in this sense, which promises that we may soon be experiencing a truly magnificent immersive space not only because of its educational nature, but also because of it’s fantastic architectural prowess.

I look forward to the day when we can all pass through the door standing in front of us, and immerse ourselves in history.