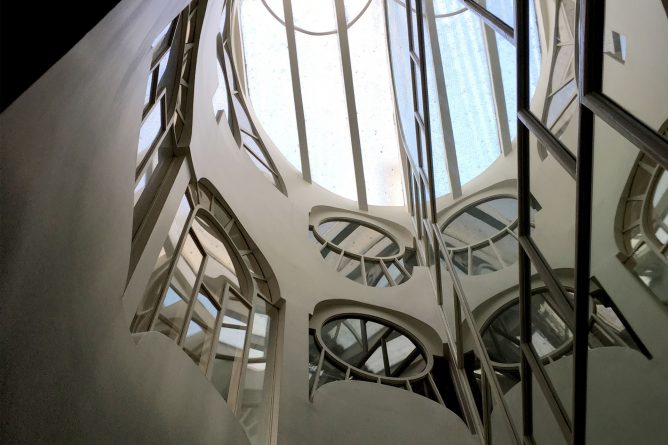 Historic England has announced this week that a number of major postmodern buildings will receive listed building status, thus preserving this important period of British architecture for posterity. Dr Timothy Brittain-Catlin, CREAte member and deputy chairman of the Twentieth Century Society which campaigned for the change, hailed this as a major event in architectural conservation history.

Dr Brittain-Catlin said ‘The Twentieth Century Society sees this announcement as an important turning point. Many of these buildings were at serious risk, and some were already being damaged or destroyed. This decision by Historic England comes as a result of a long campaign by the Society to draw attention to the monuments of British postmodernism and the risk they are at. We were the first to organise a major symposium on the issue, we made a presentation at the RIBA with a group of highly influential speakers, and we have organised walking tours and sell-out lectures to spread the word. It is important when making the case to protect buildings that show that there is wide public interest in them.

‘We won an important battle to protect James Stirling’s No 1, Poultry in the City of London from mutilation, and this latest decision shows that we were in the vanguard of the movement to protect Britain’s best postmodern heritage.

‘We supported the successful campaign to protect Sir Terry Farrell’s Comyn Ching development in 2016. KSA and the CREAte research centre value very greatly our connection with Sir Terry and we are delighted to be playing this an active role.’

Architectural historians Elain Harwood and Geraint Franklin from Historic England recently published their book on post-modern buildings in Britain in collaboration with the Twentieth Century society.