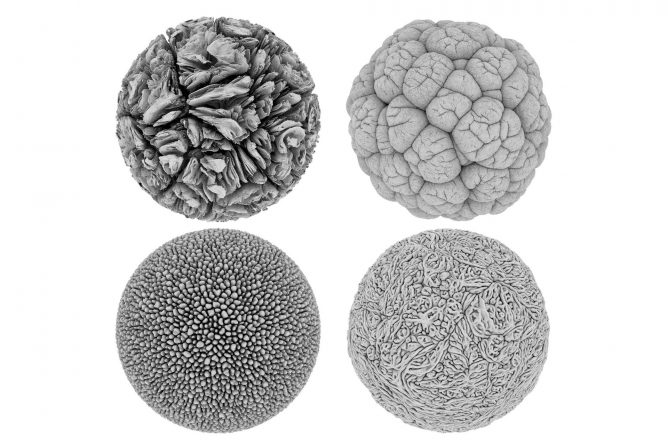 The next Digital Architecture Open Lecture will be given by Andy Lomas entitled ‘Morphogenetic Creations’ on Tuesday 23rd January 2018 in Marlowe Lecture Theatre 1.

Inspired by the work of Alan Turing, Ernst Haeckel and D’Arcy Thompson, Morphogenetic Creations is an ongoing series of art works that explore how intricate complex structure and motion can be created emergently using computer generated models of morphogenesis.

The aim is for deep emergence, with rules for growth specified at the level of interactions between individual cells. Digital simulation techniques are used to algorithmically encode the rules, and processes are run over many thousands of time steps and millions of primitives. Using a combination of evolutionary methods and machine learning, the space of possibilities is explored to discover areas of rich emergent behaviour. Creating forms using unnatural selection: survival of the intriguing instead of the fittest.

Andy Lomas is a digital artist, mathematician, and Emmy award winning supervisor of computer generated effects. He has had work exhibited in over 50 joint and solo exhibitions, including at The Royal Society, SIGGRAPH, Japan Media Arts Festival, Ars Electronica Festival, and the ZKM. His work is also in the permanent collections at the V&A and the D’Arcy Thompson Art Fund Collection. In 2014 his work Cellular Forms won The Lumen Prize Gold Award.

He is a Visiting Lecturer at The Bartlett School of Architecture and a Visiting Research Fellow at Goldsmiths University of London. His production credits include Walking With Dinosaurs, Matrix: Revolutions, Matrix: Reloaded, Over the Hedge, The Tale of Despereaux and Avatar.