With its 50th Anniversary approaching, the University of Kent decided to undergo a number of prestigious refurbishments; one was to improve the Cloister Garden in Eliot College. The Eliot College department and School of Architecture therefore agreed to set up a competition open to all students. The announcement caught our interest and so we decided to submit a design proposal to the competition.

Since its opening in 1965, the College has been strongly associated with the School of Arts.There are drama studios in the building yet students still make extensive use of the Great Hall for rehearsals. Therefore, the competition brief urged us to foster a feeling of history by linking its uses to the past and to create a multifunctional space for drama and dance practices and productions. The garden is also intended to create a tranquil and delightful spot for studying and relaxing for everyone. 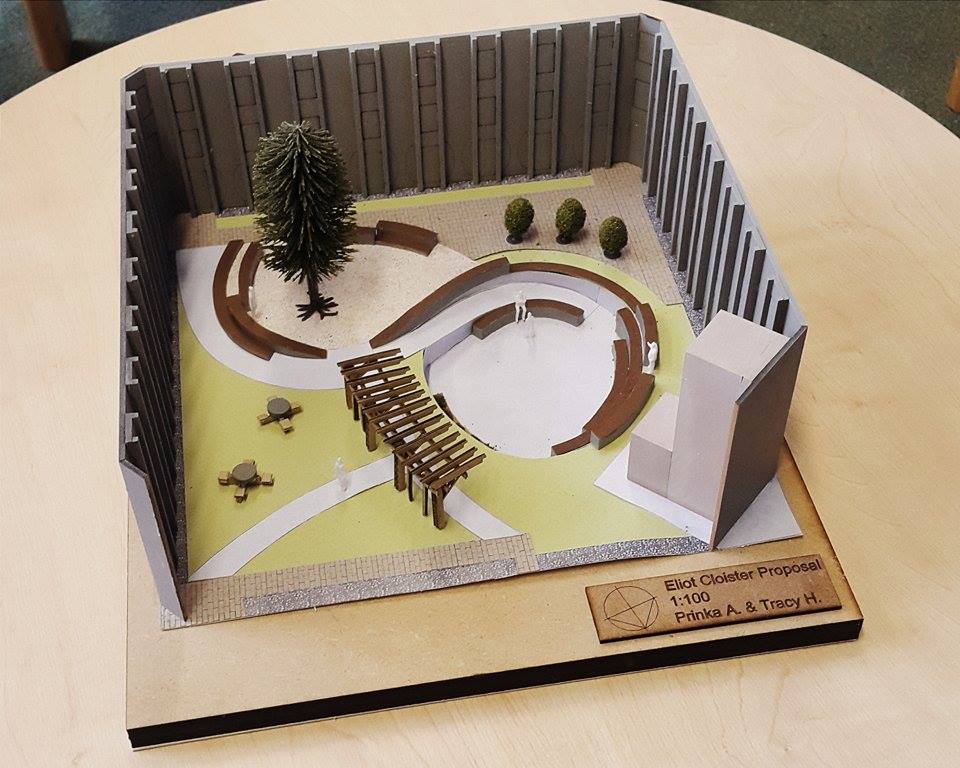 The context was a substantial factor when designing as to ensure the garden worked with the context rather than against it. Since the context reminded us of art-nouveau architecture style from its curvy organic-shaped bottom windows, we decided that the design should incorporate a similar language and not be geometrically designed. The context affected our material palette as well; it needed to brighten up the harsh Eliot concrete façade. Hence on one side we chose bright gravel for the ground, and kept the existing greenery on the rest to still encourage wildlife into the area. The benches and mini amphitheatre consolidated to produce level changes, which brings volume to the space.

Having been shortlisted to the final four, we began work on developing our design taking in to account the feedback given. With being shortlisted there was also a £75 prize money given to each team or individual to go towards the costs of creating a 1:100 scale model of our designs.

Accounting for the main point on our feedback we decided to remove the sculpture area.  This then became the pergola walkway where we incorporated flower boxes to add brightness and colour. Originally the pergola was larger but this therefore would be more costly, causing further revisions to our design and we settled on the smaller but more suited final pergola design.
Additionally we addressed disabled access. The original design involved steps to the sunken amphitheatre. Hence we changed to a ramp which curved down so aesthetically it merged in with the benches. Lastly we worked on the finishing touches of the materials and lighting for ambience at night time.

Design finalised we had a race against time. Besides participating in the Eliot Cloister competition we were approaching our intercrit in the same week. The challenge would now be communicating our idea to the judging panel and juggling two projects at once. Therefore our main focus for the week leading up to the final submission was the model and we spent the next week in the workshop. We debated on many aspects of how we wished for the model to look, and what would be the best materials to communicate the design choosing a graphic design approach. Whilst we spent our days in the workshop, we spent evenings drawing and rendering our design in to a presentable booklet. We split work evenly between us and ensured our work matched for a cohesive final outcome.

Since winning we have met with the Eliot Master and discussed a few small changes which we are working on now. The design is scheduled to begin work in the next few months and to be finished for September and the Universities 50th anniversary celebrations.