Dr. Henrik Schoenefeldt is presenting recent findings of his research into the historic stack ventilation system of the Houses of Commons at the Second Annual Construction History Society Conference 2015. The paper is entitled ‘Reid’s short-lived ventilation system for the Permanent Houses of Commons, 1847-54’, and explores the original ventilation system that was designed and implemented by the Scottish physician David Boswell Reid between 1847 and 1847. Between its inauguration in February 1852 and its full destruction by German air raids in 1941, the ventilation system of the Houses of Commons underwent a series of transformations. The original system by Reid was only used for fourteen months before it was radically transformed by another physician: Goldsworthy Gurney. The design of Reid’s short-lived ventilation system in the Houses of Commons has not previously been studied by historians, but the research has revealed that its design was distinct from those Reid had deployed in the Temporary House of Commons or the system by which it was replaced in 1854. It was a highly sophisticated system, designed to overcome some of the limitations of the simpler stack ventilation system previously tested in the Temporary House. Over two years, the ventilation had been continuously monitored and subject of numerous scientific studies, yielding detailed insights into its performance and the political and technical difficulties that led to its fall in 1854. This is the first study to reconstruct the design and performance of Reid’s design for the Permanent House of Commons and the influence of the Temporary Houses.

This paper presents a brief overview of the findings of a larger research project undertaken by the author, entitled Inquiries into the Historic Ventilation System of the Palace of Westminster, 1837-1924 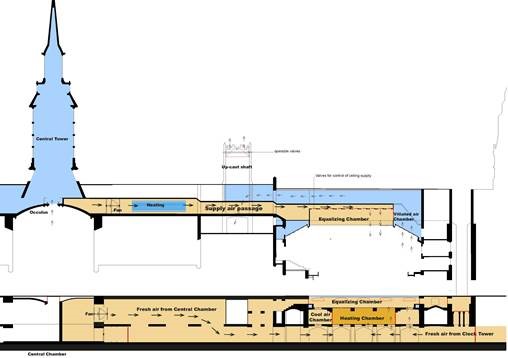 Dr Schoenefeldt has written an article about his recent research for The Conservation. To read the article, please click here.