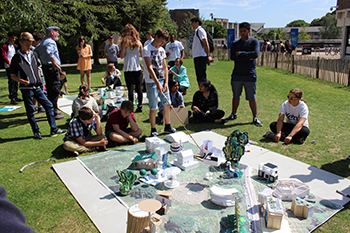 The second Summer School at the Kent School of Architecture was a great success and we were lucky again with the weather!

Pupils, primarily from local Partner Schools, enjoyed three days on campus engaging with a variety of activities relating to the process of designing a house for themselves and creating a community.

Pupils made a tower in ten minutes from small wooden blocks as an ice breaker followed by two short lectures introduced ideas of home and community.

They chose a role from a list and created a self-portrait illustrating themselves as an artist, a book dealer, a bird watcher, a gardener etc.  Following a site visit on campus and choosing a plot, pupils began the process of sketching out ideas of a house in earnest to be developed into models. The house needed to include a space to eat, sleep, wash and relax. An area was also included to work in their chosen role. A formal session of drawing on a drawing board allowed the pupils to learn about scale, plans and elevations with the associated drawing conventions.