The final week of the Spring term in the Kent School of Architecture was in full swing with both intercrit and final crit assessments. Students from different year groups were scattered across the studio spaces in Marlowe building with either pinned up sheets, models or digitally presented drawings, in order to get useful feedback on the work they had produced so far.

The week began with the BA (Hons) Stage 1 final crits for the module ‘Building Design’. For their brief, the students designed an art gallery based in Barcelona, and it was a culmination of the basic skills they picked up over the first year of their architectural journeys. From using pencils and drawing boards to present their ‘shelter’ projects at the very beginning of the year, it has been a fantastic progression to see students going out of their comfort zone to use mixed media, colour and textures to ultimately give them extra sufficient material for their portfolio assessment in the summer term.

At the same time, MArch Part II Stage 4 students received intercrit feedback on their ‘Design 4’ projects. The four Units spread out over Monday and Tuesday, and each Unit got the opportunity to not only explain their up-to-date schemes with their own tutors, but tutors from other Units contributed to the crit panel too. This enabled fresh new perspectives, especially for other tutors who were curious to see what the other Units have been up to. There was even an appearance from the Head of School, Don Gray, who assessed Unit 3’s project based in Istanbul, Turkey.

Thursday proved to be a buzzing day for crits with both Stage 5 Technology intercrits and Stage 2 final crits for the module ‘Collective Dwelling’. Stage 5 were expected to have drilled down the technical aspects of their design projects and all received specialist input from technology and structural tutors, as well as being given an indication by Unit design tutors on what they need to push for before their final assessments in the summer term. Stage 2, on the other hand, had completed their schemes to design student housing blocks aimed for an urban development site near the River Stour in Canterbury. Design tutors collaborated with volunteering MArch students as crit panellists in the Digital Crit Room, and then pinpointed the potential in the projects and see whether the students started to get to grips with construction details and considerations given to lighting, views or other contextual analysis. 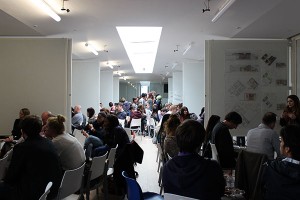 KSA would like to wish everyone a well-deserved break during Easter and all the best to students preparing for final marked submissions in the summer term.