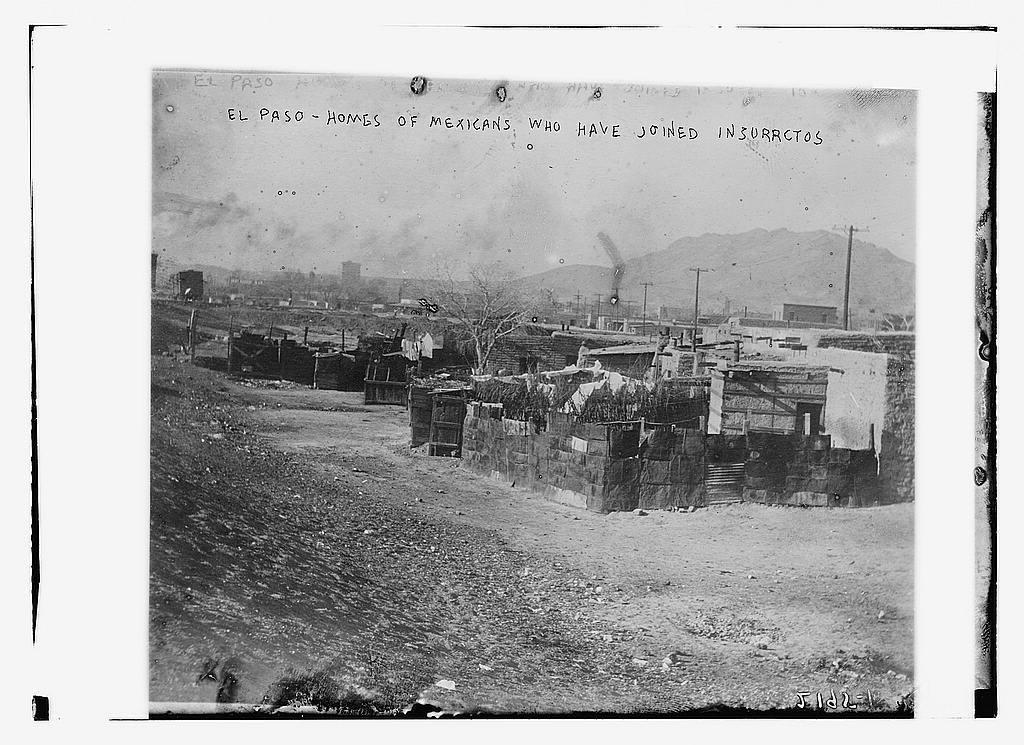 "El Paso homes of Mexicans who have joined insurrectos (LOC)" by The Library of Congress. https://www.flickr.com/commons/usage/

The ports of Holland, the docks of Bordeaux and Liverpool owe their importance to the trade and deportation of millions of slaves. And when we hear the head of a European nation declare with hand on heart that he must come to the aid of the unfortunate people of the underdeveloped world, we do not tremble with gratitude.

Dr Knox’s particular field of interest lies in examining how Marxist and Third Worldist theorists and activists have understood and dealt with the relationship between imperialism and international law. This approach informed his lecture on the ways in which international human rights law has negotiated and continues to negotiate questions of material need across the planet.

Dr Knox invited us to question how we approach poverty. He started by explaining that poverty is a systemic phenomenon. He further explained, as a result, that poverty is not a random event but a recurrent problem due to an international economic order geared towards benefiting only a few countries and a few groups. The result of this is that “if you are poor, you tend to stay poor”.

Dr Knox illustrated the foundation of such economic order by giving an example. He explained that, food industries make food for a profit, which individuals will then “buy” in order to fulfil their needs. When it comes to people with limited resources, the system in place is then not oriented towards satisfying their needs. The poor, in brief, do not represent a source of profits. The foundation of this arrangement lies in the birth and evolution of capitalism. As explained through Marxist theories, treating labour and nature as commodities means that the organising value of society is money rather than people.

The lecture went into engaging with different standard aesthetic representations of the poor. Dr Knox wanted to demonstrate to the students the importance of paying attention to the racialised and political nature of these representations. The first set of pictures conveyed an image of poor, normally from the horn of Africa, lacking food and suffering – what Dr Knox called depictions of “abject poverty”. The second image depicted children – again racialised subjects – smiling, which give the impression that being poor is glorious, because individuals who are poor have the “luxurious” freedom to do what pleases them. Finally, the third set of representations of poor people depicts them as marching in the streets, claiming back what belongs to them. Comparing these three sets of representations helped students analyse how poverty has been understood in the international sphere.

One fascinating aspect of Dr Knox’s lecture was the invitation to question the different relationships that exist between poverty, human rights and international law. Dr Knox explained that human rights tend to often be dismissed when poverty is discussed as a result of an assumption that they are not related, or only related in the sense that human rights are seen as the solution to global materials needs. But one complex issue is the element of cui bono? Who profits off keeping the status quo the way it currently is? In order to challenge poverty there is a need to challenge the people who benefit from poverty and the system itself. As stated by Karl Marx: “the so called rights of man, as distinct from the rights of the citizen, are simply the rights of a member of civil society, that is of egoistic man of man separated from other men and from the community.”[1] In this approach, human rights law is involved in creating and sustaining the conditions which produce poverty, since it treats individuals as abstractly equal and so does not focus on the relationships which produce poverty.

At the end of the lecture, Dr Knox further touched upon the remedies that are being pursued by the international community to improve poverty. Such solutions, however, do not often grapple with the deeper issues that underpin poverty and simply are an exercise to make it slightly more palatable. Countries that take decisions on how to tackle poverty are the ones that have profited and gained more from the current global economic order. An example of these solutions is the Multilateral Debt Relief Initiative. A group of eight major industrial countries proposed in 2005 to help solve poverty. The proposal was that three multilateral institutions, the International Monetary Fund, the International Development Association and the African Development Fund could cancel the entire debt of countries that had reached eligibility for full and irrevocable debt relief. It stipulated, however, that there would be financial help to countries as long as such countries followed a set of obligations outlined by the International Monetary Fund (IMF) and demonstrated satisfactory performance in macroeconomic policies.

Dr Knox encouraged us to question the structural forces underpinning global poverty, and how the international community, through both norms and policies, participate in perpetrating it.

On behalf of the students of the International Human Rights module, I would like to thank Dr Robert Knox once again for giving us such an interesting opportunity to question the legal and political order that is perpetuating global poverty.