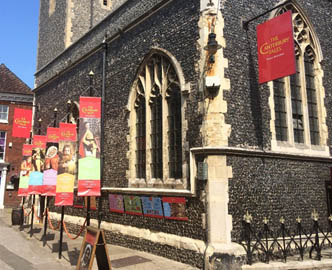 Going to the University of Kent offers lots more than just your studies.  Living in Canterbury, you are blessed to be in a city that has a rich historical and cultural heritage. So while living here I highly encourage you to get out of the university bubble, climb down the hill and explore what this city has to offer. Here is just a sample of what is on offer…

A visit to the Cathedral is a must for all residents and visitors to Canterbury. The Cathedral is both a place of worship and a world heritage site open for visitors.  Canterbury Cathedral is the Mother Church for the worldwide Anglican Communion and the seat of the Archbishop of Canterbury.  The Cathedral was established in 597AD by St Augustine, who was the first Archbishop of Canterbury.  In 1170 Thomas Becket (Archbishop from 1162-1170) was murdered by King Henry II’s knights who believed the King wanted Becket dead.  Soon after Becket was made a saint and a martyr in 1173, many miracles were reported to have taken place at the site of the murder.  This has attracted thousands of pilgrims to Canterbury ever since.

Visiting the Cathedral will not cost you a penny, with your Kent Student ID card you can get in for FREE.  There are guided tours, audio-tours and audio-visuals in several languages available for you, but if you’d rather do your own thing here are a few of the places of particular importance/beauty to the Cathedral.

Join the costumed characters as you explore the sights, sounds and smells of 14th century England.  The hand-held audio guide (in a variety of languages) leads you through an interactive tour of medieval England and five of the Chaucer’s most loved tales.

This attraction is perfect for guests learning the English language, as well as discovering an important part of English cultural history. https://www.canterburytales.org.uk/

If you want proof that Canterbury is an old town visit the Canterbury Roman museum – Kent’s only Roman Museum.  This museum is at the site of the remnants of an old Roman town house that was discovered during an excavation after World War Two.  There is a preserved floor mosaic, underfloor heating system and wall paintings.  The museum is also home to collections of pottery, glassware, jewellery and silverware.

If you fancy to know more about the darker side of Canterbury, there is also a ghost tour.  This is where a guide will lead you around Canterbury and recount the tales of the ghosts of Canterbury.