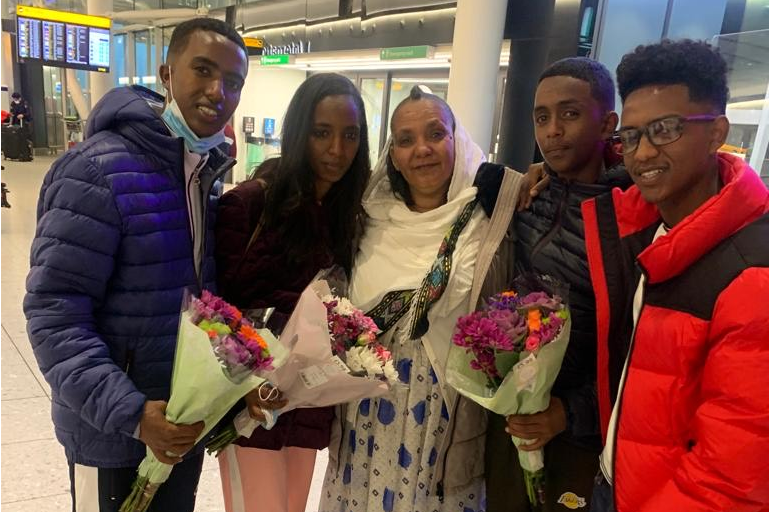 Finally on 7 December, after 18 months of waiting, anxiety, hardship and fear, Clinic client SK and his mother were at Heathrow to welcome his three siblings HK, FK and FK to Britain under refugee family reunion.

In 2018 SK heard that his mother had fled to Khartoum. Clinic solicitor Sheona York assisted SK with an application for her to join him. The application was refused: Sheona represented at the appeal which was allowed. It then took six months for the Home Office to issue the visa. Then SK discovered that his three siblings had also fled Eritrea and had reached Addis Ababa, Ethiopia. His application for them, made by another solicitor, was refused. The Clinic took over the appeal.

In the academic year 2020-2021, Clinical Option students Tze Lok Cheong (Eccles) and Annabel Green, met the client and his mother via Zoom. They prepared detailed and eloquent witness statements and researched objective evidence about the position of Eritrean refugees in Addis Ababa once the war in Tigray had started. Eventually the Tribunal agreed to expedite the appeal, and the Home Office, under pressure from the Tribunal, reconsidered the case and withdrew the refusal. That was in August – it took until November for the Home Office to prepare and issue the visas, during which time SK and his mother had daily desperate phone calls with the siblings, by then terrified to go out because of the growing danger in the Ethiopian capital to people who sounded like Tigrayans. Once the visas had been issued the Red Cross stepped in to assist the young people navigate the bureaucracy involved when undocumented children try to leave a foreign country. The whole family are now united for the first time since SK fled in 2014.

Here is a truly happy family! Postscript: Clinic caseworker Dr Richard Warren has received some similar news this week in a case of his – another young Eritrean refugee trying to get his teenage sister here, from desperate circumstances in Khartoum, Sudan, has just found that the Home Office has withdrawn its refusal and will grant her a visa too.