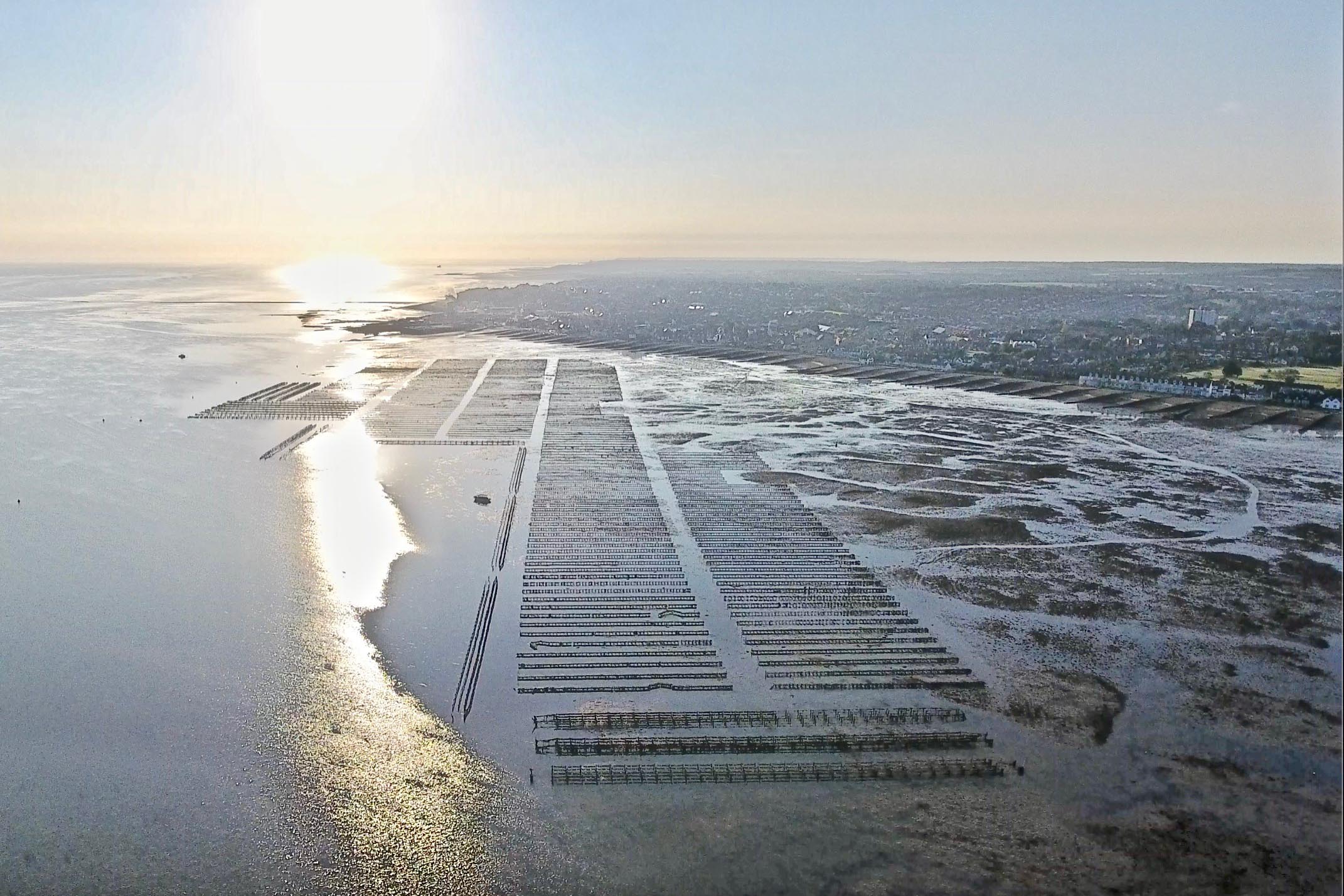 Kent Law Clinic has leant its legal expertise to Whitstable Beach Campaign (WBC) during a nine-day public inquiry into the fate of a controversial oyster farm erected on the foreshore by Whitstable Oyster Fishery Company (WOFC).

The inquiry is one of the first to test the Government’s new South-East Inshore Marine Plan adopted in June 2021. The decision, expected within a few months, is likely to set a precedent for future planning proposals in inter-tidal zones

The inquiry was held in the wake of an enforcement notice, served by Canterbury City Council (CCC), which ordered the removal of a number of oyster trestles installed by WOFC in an inter-tidal area between the low-water and high-water marks (the foreshore). WOFC has been developing the oyster farm across almost 16 hectares of Whitstable’s central foreshore since 2010 without planning permission or a marine licence. The farm comprises fixed rows of metal oyster trestles. Sacks of oysters are laid on the trestles for two to three years until they reach a marketable size. More recently, WOFC has also implemented “pole and line” development of the oysters; poles are pile driven five feet into the seabed, and the oyster sacks are hung over a line suspended between them.

The trestles, poles and lines create dangers and obstructions to sailors, windsurfers, swimmers and other water users. Signs and buoys surround the farm, warning against swimming or entering into a de facto exclusion zone of 37 hectares.

Whitstable Beach Campaign, a community group which campaigns to maintain public access to the beach and foreshore, argue that the farm has seriously affected the ability of residents and seaside visitors to enjoy the foreshore. Campaigners say that the exclusion zone has restricted many water sports which formerly took place in the shallow waters.

Kent Law Clinic Solicitor Elaine Sherratt supported WBC campaigners throughout the nine-day inquiry. She said: ‘The adoption for the first time in June 2021 of a marine plan for the south-east of England means that a suite of new planning policies applies to the inter-tidal area of the coast and the inshore sea. Many of these policies show considerable deference to principles of respecting recreational and existing uses of the sea, promoting coexisting use of the sea, and promoting public access. These are important concerns, almost entirely ignored by the local planning authority’s policies. CCC’s local plan barely acknowledged the existence of the foreshore within their district and had almost nothing to say about planning priorities for it.

‘This is one of the first inquiries under the new marine planning framework involving the foreshore and may well set a precedent for the future way in which planning for the inter-tidal zone and the sea is seen. It will have to resolve conflicts between the planning considerations affecting the land and sea, and whether one set of policies overrides the other. It is quite fitting that this case arises out of a conflict between rights of access of the public and the commercial interests of a developer in relation to a space which is, within the span of six hours, both land and sea.’ We instructed a remarkable young counsel from Francis Taylor Building, Michael Brett. He came up with a cogent set of arguments and convincingly broke down the evidence of four of the WOFC’s expert witnesses in cross examination.

This public inquiry was on every level an extraordinary effort. WBC had organised a team of community note keepers and coordinated witnesses from amongst their supporters and other community groups in Whitstable. They took upon themselves a huge burden of the work in obtaining, analysing, and presenting evidence, of sifting through and trying to understand with our help thousands of pages of planning and environmental policies and how they might be relevant.

Then there was an outpouring of pro bono help from the academic community – some sought out by us or our clients. But others had heard of the case through the grapevine and took it on themselves to turn up as third parties, day after day, to get their expert evidence across. They magnified our efforts by cross examining the expert witnesses in their field of expertise.

We would like to recognise the contribution of colleagues and retired colleagues within the academic community:

Taking on a well-heeled developer

We needed expert witnesses and we needed more expert legal advice than we were able to obtain in the early stages of the case before our client’s efforts had managed to raise a small fighting fund. But the volunteer efforts of the client – supported by the community, the Kent Law Clinic and the academic pro bono contribution counted hugely in the balance.

We were shocked by how stacked against the public the whole process was. It was not possible to get the papers filed in the case to discover what the case was unless you were a party to the proceedings. WBC had to apply to become parties themselves just to know what was going on in order to play a meaningful part. This was supposed to be a public inquiry.

No ordinary member of the public could make a contribution based on knowing what the other parties had submitted in evidence. This was cured only on the sixth day of the inquiry even though WBC had raised the issue on several occasions with the Inspector and CCC over the preceding two years. By the time access to the papers by the public was finally resolved, the chance to prepare evidence or cross examine witnesses who had already been heard had gone.

The WOFC constantly threw around threats of seeking costs against any party or body who stood in their way. The burden was on them as the Appellant to show that it was beyond reasonable scientific doubt that the development would not have significant adverse effects on the conservation objectives applicable in a marine area protected by multiple environmental designations.

Up to the start of the inquiry Natural England (NE), whose role is to advise in relation to the assessment of such matters, maintained a position that they had not been satisfied that this threshold had been met. Throughout the first week of the inquiry parallel negotiations (to which we were not a party) were taking place between the Appellant’s expert and NE’s expert aimed at forcing NE’s hand into agreeing with the Appellant’s expert witness. Threats of costs were made, and NE eventually agreed they were satisfied.

The City Council (who had initiated the enforcement action) were also placed under pressure by threat of costs to abandon their case and to withdraw the enforcement notice. They eventually dropped their two limited grounds of opposition to the grant of planning permission for the development, leaving the public to fight on over issues of amenity use of the foreshore and sea, public safety, landscape issues, economic and social factors, environment, and archaeology.   At one point in the inquiry the developer held over the head of the Council an ultimatum to withdraw the enforcement notice itself. This would have meant that the public would have been denied their ability to have the planning merits of the development on the foreshore determined.

In the event the enforcement notice was not withdrawn so that the public have, despite all the heavy-handed tactics applied, managed to have their case and voice heard.

However, the WOFC continues in what is, hopefully, a meritless application for costs against CCC. But costs are rumoured to run to hundreds of thousands of pounds. Any Council who faces such a bill may well conclude that it is just too risky to enforce against a big player ever again, leaving enforcement just to run against smaller infringements of planning control by individuals unlikely to be able to fight back.