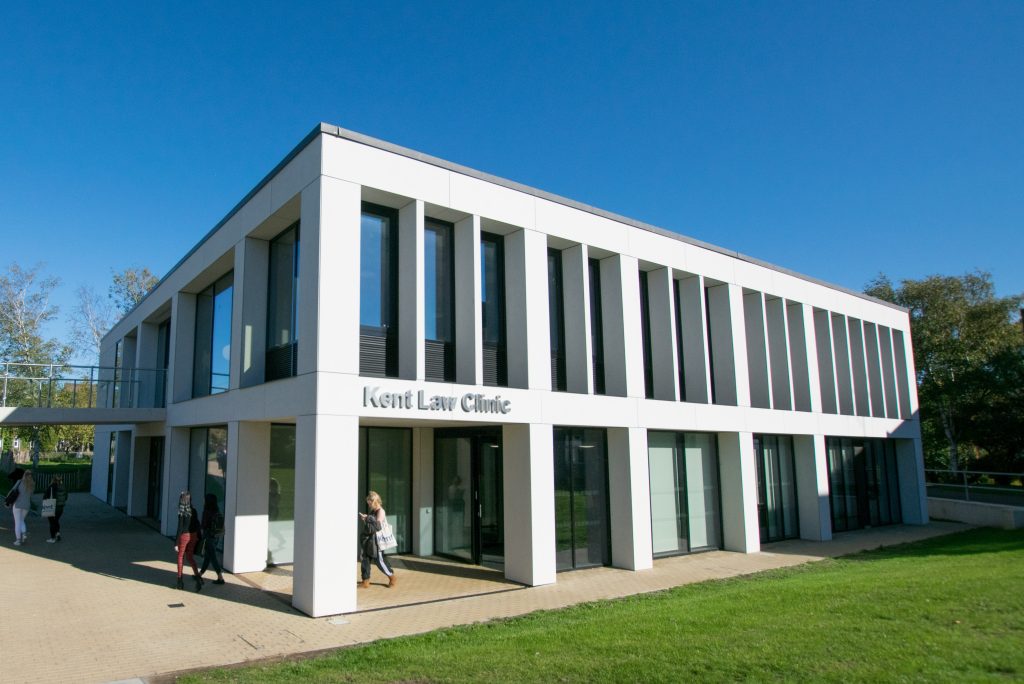 Kent Law Clinic Solicitor Elaine Sherratt and law student Christo Xiros have resolved a case in less than a week, securing £3.5k in redundancy arrears for a client at an Employment Tribunal hearing.

Final-year Law LLB student Christos, who is studying the Clinical Option module, was assigned to work on the case with Elaine. They had their first meeting with the client on Monday last week after taking on the case the Friday before. After some extensive legal research over the weekend, the case was speedily – and surprisingly – resolved at the Tribunal hearing on Wednesday.

Elaine explains the case in further detail below.

‘Our client had worked at a farm shop in Faversham since 2004 (more than 14 years in total). The shop changed hands to a new owner four years ago but our client continued working at the shop for the new owner until she was made redundant in March this year.

‘The farm shop proprietor had paid our client a redundancy payment (and notice payment) based on three years service so the client made a claim that she was entitled to payments based on her full 14 years service.

‘Under the Transfer of Business (Protection of Employment) Regulations 2006 and section 218 Employment Rights Act 1996, we argued that the client was entitled to make a claim based on 14 years “continuous employment” if:

‘The proprietor was insistent there was no transfer of the business; he maintained he had only bought the premises not the business. He produced a letter – apparently written by our client to the shop’s former owner just days before the sale of the business – giving a weeks’ notice of her resignation from their employment. This notice period expired two days before the date on which the new owner took over the shop.

‘The proprietor intended to argue:

‘Our legal research helped identify that it was highly arguable that this case could be contested on the evidence about whether there was in reality just a sale of premises, or the sale of a business as a going concern. Also on the principles derived from several cases about being employed “immediately before” or “at the time of” the transfer.

‘In the course of running this case, both our client (the Claimant) and the shop owner (the Respondent) had made some mistakes. Both acted for themselves. Our client had commenced the claim against Mr NB (the shop owner), instead of his company MBFP Ltd. The Respondent had not filed a Response to the claim within the 28-day time limit. But he filed one at 4:30pm on Monday, just in time for the client’s first meeting with us!

‘We went along to the Tribunal anticipating that there would be an argument about whether the Respondent should be allowed to file his claim late and to defend the case, and also about whether the Claimant should be allowed to amend the name of the party she was suing as her employer. We filed short evidence in relation to these questions. We thought that the substantive issues and the interesting legal arguments we had identified in our initial research would likely be decided at another hearing, perhaps six months hence.

‘The Employment Judge took a dim view of the Respondent’s reason for filing the Response some two months late. The Judge said that the Respondent had not read the notice received from the Tribunal properly and had overlooked the requirement to make a Response.

‘The Judge also carefully enquired into whether the case the Respondent wanted to make was likely to have merit. We had done a land registry search and were able to point out that Mr NB had completed his purchase of the premises about two weeks before he started trading from the shop and, crucially, before the date of the Claimant’s resignation. We could show therefore that she was still employed at the date of the first major step in the transfer, even if she had “resigned” just before the last. Regulation 4(3) of the TUPE Regs extends the meaning of “employed immediately before the transfer” where the transfer is effected by a series of two or more transactions to include a person employed immediately before any of those transactions.

‘In fact, the resignation may have been a put-up job. Our client had been asked by her former employer to write out the letter of resignation in her last week working for them. She said she had done this, having already agreed to go to work for the new proprietor the following week. She worked her normal days in both the week before and the week of the transfer.

‘The Employment Judge agreed to substitute the company as the Respondent. The evidence we filed showed the very close connection between the company and Mr NB who was its managing director and owned all but 2 of 55000 of the company’s shares. The evidence helped to show he was in the habit of referring to his business by its trading name on his headed note paper and business website, so that it was not clear to anyone whether they were dealing with a company or an individual. There was no real prejudice to substituting the company as the Respondent as the company was fully informed of the claims made. We believe our evidence may have helped persuade the Tribunal that the mistake the client had made in who she sued was at least partly Mr NB’s fault.

‘The Judge decided she would not allow the Respondent to file his response late – this meant the Respondent could not defend the claim. The Judge immediately went on to assess compensation, and awarded the shortfall in the redundancy payment and notice amounting to just over £3500.

‘Sometimes things move faster than you ever think possible and we got a great result for this client within a matter of days!’