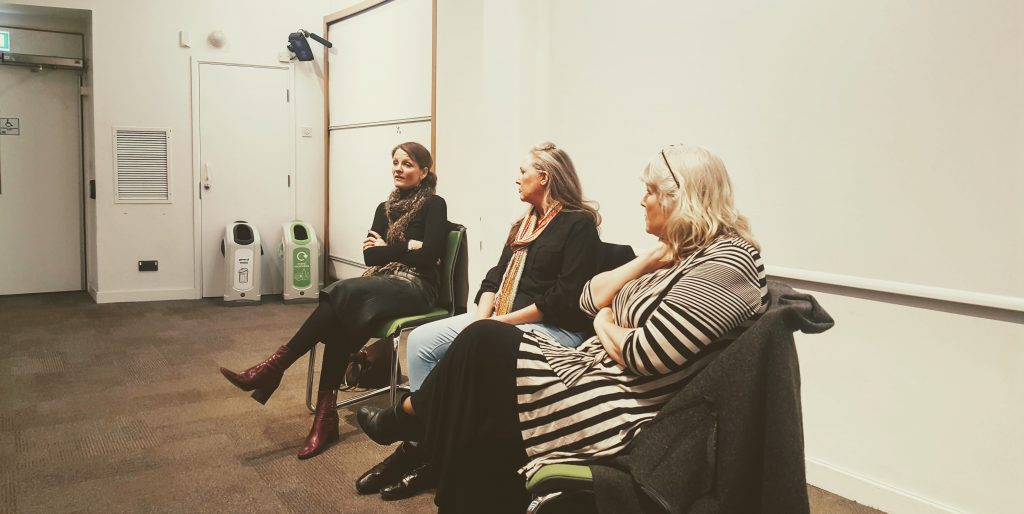 This week the Justice Reform Project (JRP), part of the Clinic Criminal Justice Project at Kent Law Clinic, held a panel discussion with guest speakers Anna Rowe, Nicola Brookes and Claire Thompson (pictured above). Each of these women have remarkable stories of experiencing serious abuse and online harm. This was compounded by the equally remarkable stories of their fight for justice.

This year the JRP team of 18 students has been researching the extent of online offending with particular reference to social media, harassment and sexual offences. We are compiling our findings in a report to highlight the gaps in the law between the online and offline world. In order to gain some first-hand insight, the team hosted a panel discussion with guests who have found themselves at the forefront of the campaigns calling for an overhaul of the regulatory framework to deal with seriously harmful online behaviour.

The talk was opened by Anna Rowe explaining her experience in which she claims to have been lured into sex by deception. She told about the refusal to investigate her case by police and how she has come to be part of a growing community of women survivors who all tell of similar experiences in the criminal justice system. Anna has been very public about her campaign to criminalise catfishing and as a result lost her job and in her campaign work suffered further though online abuse and harassment. Despite all odds, Anna has not backed down and in her talk, she explained why these offences were serious and how current culture still dangerously blames the victims.

Next, we heard from Nicola Brookes who told us how she became the victim of inexplicable and unprovoked online harassment that began by posting a comment on a Facebook page and ended with her facing hundreds of abuse comments on a daily basis from complete strangers, her profile was cloned, she was repeatedly doxed (whereby personal information including address is posted online without consent – including her address), and she received death threats. Nicola enlightened students on the absolute fear she felt when police didn’t act at all despite her arriving with pages and pages showing the online abuse. Her case spans nearly a decade and throughout she has been dismissed by the police and left without any level of protection. The most concerning thing to be heard was the dangerous presumptions by police that such online offences are trivial by nature, fall at the feet of the company and do not engage the criminal law.

But for the good fortune of securing pro bono representation Nicola may never have made legal history by forcing a global social media platform to disclose the evidence required to prove the identity of her abusers. The story didn’t end there and continues to this day. Is it relevant that the main perpetrator who is yet to be prosecuted is a police officer?

Our third speaker was, Claire Thompson the force behind the Campaign Against Adult Grooming. She too told her story as a survivor of adult grooming, having been lured into sex by deception. She too took her case to the police and was not taken seriously. Claire turned to the need to raise public awareness of the dangers of sexual predators of this nature who take advantage of the loophole in the law that allows adult grooming to persist. She too, as a result of going public with her case suffered further online abuse from anonymous users. Due to the nature of her job, she has personal contact information readily available online. She was harassed online and received unsolicited live Facetime nudes from anonymous users. Believing that her perpetrator was behind all this abuse, she questioned his coworkers and found instead it was she who faced police action for harassing him. Her experiences began in 2008 and continue to this day.

All panelists agreed to the talk being recorded. They listened intently to the ideas behind this student project and the hope to take our report to Westminster with the help of local MP Rosie Duffield. The talk ended with further ideas as to how we move forward with our project, all three women gave constructive advice and offered the data and research they have collated in their campaign work. The talk will lead to future collaboration on the research project and with the white paper on online harms being released soon the debate is about to take an interesting turn.

It was such a wonderful opportunity for students to listen to three devoted women, who have jeopardised their jobs, social status, and time in campaigning for justice. It was an uncomfortable but fully necessary discussion that will help us as students reflect on this debate.