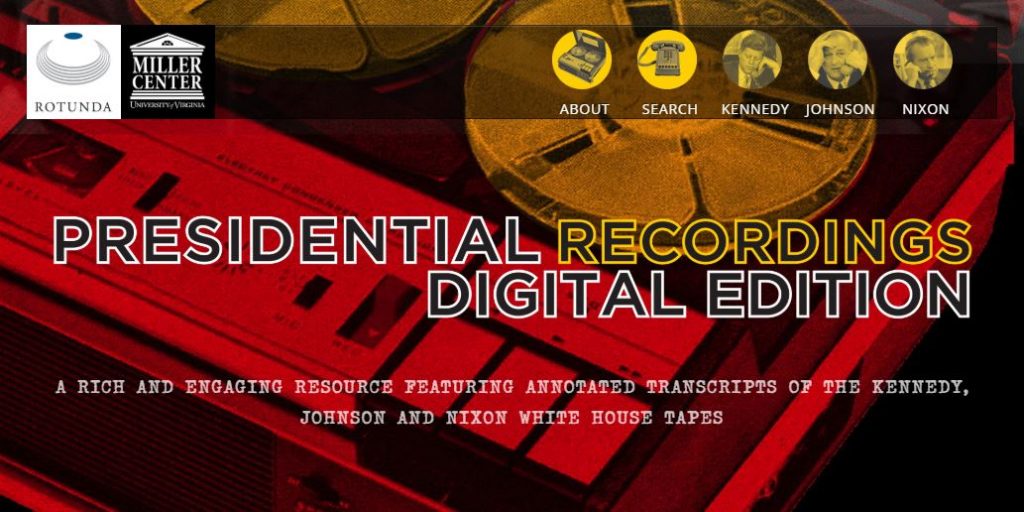 Of interest to anyone studying American Studies, History or Politics and International Relations.

More about this resource

Between 1940 and 1973, six consecutive American presidents (Franklin D. Roosevelt, Harry S. Truman, Dwight D. Eisenhower, John F. Kennedy, Lyndon B. Johnson, and Richard Nixon) secretly taped thousands of their meeting and telephone conversations. These exchanges took place in the White House and in the Executive Office Building, at Camp David and at the LBJ Ranch, and during travel.

From Franklin D. Roosevelt, whose infrequent recordings yielded only 8 hours of taped material, to Richard M. Nixon, whose voice-activated system captured 3,400 hours of discussion, the White House tapes constitute a unique and irreplaceable source for the study of U.S. history and American government covering major issues such as the Cold War, the Civil Rights Movement and the Vietnam War.

Each conversation is fully transcribed and annotated, and accompanied by its audio file and includes photo and video galleries and a linked timeline.

Want to suggest a resource?

If you want us to add a specific resource or have comments about any existing resources, email libraryhelp@kent.ac.uk