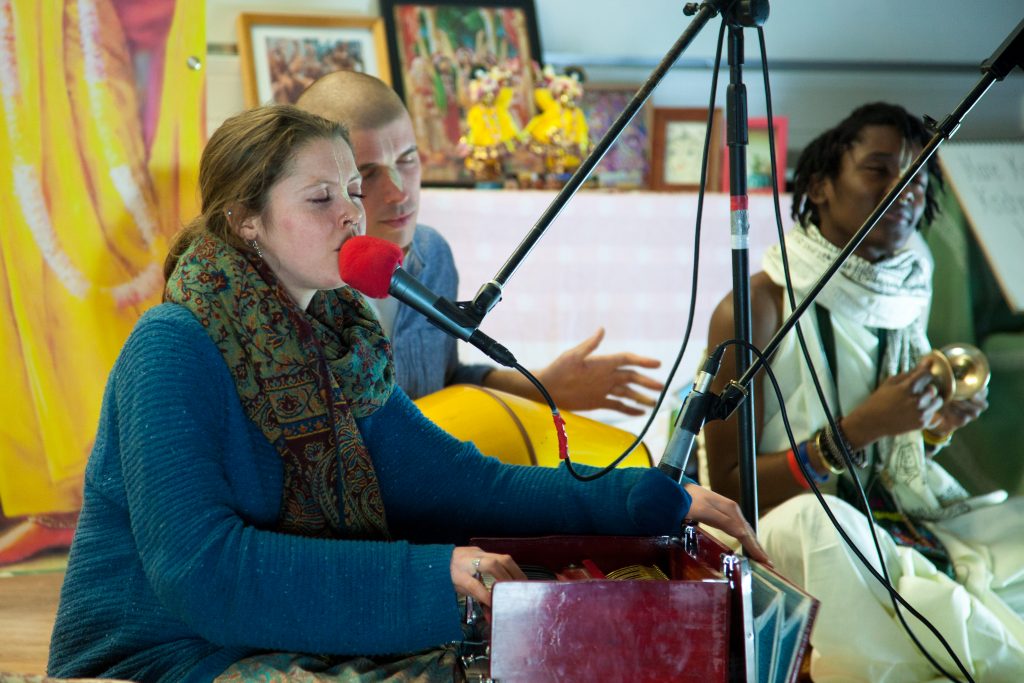 International Partnerships were delighted to support Kent’s Culture of Consciousness Festival through our Multicultural Events Fund.

“On February 28th, during perhaps some of the most extreme weather conditions we will face this year, the Krishna Consciousness Society held its Culture of Consciousness Festival. Our festival team of committee members, local devotees and a monk transformed the Peter Brown room in Darwin’s Missing Link into a temple: the hall became home to an altar with deities and offerings, and a book table offering spiritual literature, in exchange for donations, was arranged. Our festival was free thanks to funding from both the Multicultural Events Fund and Kent Union’s Worldfest budget, for which we are very grateful.

The order of events encapsulated Vedic cultural traditions, including Mantra Meditation, or kirtan, a drama performance by the Bhaktivedanta Players who had driven from London to take part, a poetry reading by Mantra Chaitanya Das, and a showing of the film trailer for “Hare Krishna! The Mantra, The Movement and The Swami Who Started It All.”

The second half of the evening introduced us to a travelling monk, Sundar Nitai Das, who executed a talk about his travels and experiences as a monk, and upon finishing welcomed any questions from the inquisitive audience of 55-60 people. After the questions had been answered, the stage was cleared for Hemi Mukhi Devi Dasi who performed a beautiful devotional dance to Here Comes The Sun by The Beatles, showing gratitude for important figures such as George Harrison and Srila Prabhupada for the advancement of the Hare Krishna Movement.

The final event was the most interactive and energetic part of the night; Sundar Nitai Das led a huge kirtan which involved everybody in the room dancing and singing The Maha Mantra, to the accompaniment of a Mridanga, a type of drum, and an accordion. Even the more shy members of the audience were engaged and took part which was great to see. The finale was followed by a vegetarian feast from Govinda’s restaurant, which got gold star reviews. The rest of the night also enjoyed these dazzling responses from the audience – speaking with people who had come along proved to us that we had met our goals. The audience had been truly entertained, enriched and, most importantly, fed, and for free”.