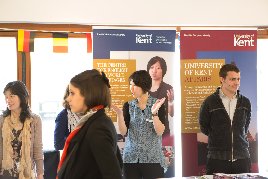 On 9th May 2013, Europe Day celebrations took place at the Canterbury campus of the University of Kent – the UK’s European University. This year, the occasion also marked the formal opening of the University’s Global Europe Centre.

The Global Europe Centre (GEC) is a new research centre focusing on Europe, its member states, and its place in a changing world. The Centre is based within the School of Politics and International Relations and at the Brussels School of International Studies, and is headed by Professor Richard Whitman, Director of the GEC, and Professor Elena Korosteleva, Director of the GEC (Professional Studies).

During Europe Day a programme of events took place in the Gulbenkian Theatre, starting with a “University Challenge”-style quiz in which teams of school pupils from local schools – St. Edmunds and The King’s School – competed to answer a range of EU-themed questions. This was a lively and fun event resulting in a win for the King’s School. Winners and runners-up prizes were awarded by the Lord Mayor of Canterbury, Robert Waters, who attended the Europe Day celebrations with the Lady Mayoress, Sally Waters.

This was followed by a presentation on European careers by David Bearfield, Director of the European Communities Personnel Selection Office (EPSO), an inter-institutional office responsible for selecting staff to work for the Institutions and Agencies of the European Union.

The morning’s proceedings were followed by a lunch reception in the Gulbenkian Café accompanied by live music from local musician Richard Dray. Speeches were made by Professor Whitman, Director of the Global Europe Centre, Professor Alex Hughes, PVC External, Robert Waters, Lord Mayor of Canterbury, Antonia Mochan, Head of Communication at European Commission in London, and Michelle Flood from the European Parliamentary Office in London.

The afternoon began with the GEC associates’ debate on the topic: ‘What future for Europe?’. This was a lively and thought-provoking debate involving audience members and a panel chaired by Prof Whitman and comprising Prof Richard Sakwa, Head of the School of Politics and International Relations, Prof Roger Vickerman, Dean of the Brussels School of International Studies, Dr Martin Hedemann-Robinson, Senior Lecturer Kent Law School, and Dr Fragkiskos Filippaios, Reader in International Business, Kent Business School.

A European Information Fair was held throughout the day in the Gulbenkian Café which included representatives of International Development, the School of Politics and International Relations, Kent Business School, the Centre for English and World Languages, the Careers and Employability Service, Kent’s postgraduate centres in Brussels, Paris, Athens and Rome, European Student Societies, as well as external organisations including the Canterbury Twinning Association and the European Communities Personnel Selection Office (EPSO).

Visitors to the Gulbenkian Café, which served a range of European-themed specials, were encouraged to vote for their favourite photographs from a display of entrants to the student photo exhibition ‘What does Europe mean to you?’ as well as entering the European quiz. There was also the chance to join in a game of pétanque organised by Kent Sport.

Elsewhere on campus, Research Services hosted a European Grants Factory, which consisted of two workshops: ‘An Overview of Horizon 2020’, the EU’s new funding programme to support research, and a session entitled ‘European Funding: is it for me?’. Both events were very well attended by Kent staff.

The day’s celebrations concluded with the screening of Michael Haneke’s Amour, winner of the Palme d’Or, Cannes 2012.