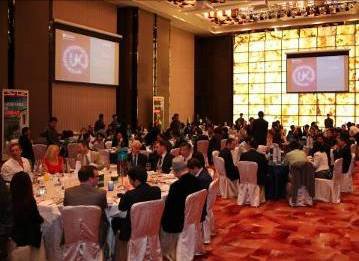 International Development is delighted to be able to congratulate two of our long standing and valued recruitment agents, GEN Education in Malaysia and UKEAS Group in Taiwan, on their success at the first ever British Council East Asia Education Agent Awards ceremony that took place in Guangzhou, China in March.

GEN Education Malaysia scooped the Entrepreneurial Award, which was received by Mr Joseph Hii, the Executive Director. Mr Hii said, “I’m proud to come here all the way from Malaysia, a regional hub for tertiary education. This award is an acknowledgement of all our hard work.”

In the final accolade of the evening Taiwan’s UKEAS Group was awarded Best Partner. Richard Smith, Director, and the founder of the company accepted the award and said that, “receiving the award was an especially proud moment for him.” Taiwan’s UKEAS Group (United Kingdom Education Advisory Service), has 29 offices in 6 countries and 2013 marks the company’s 20th year of operations.

With at least 40 per cent of East Asia students who choose to study abroad employing the services of Education Agents, and over 110,000 UK Tier 4 and Student Visas issued to East Asia students in 2012, the industry is playing an increasingly critical role in the international operations of UK universities. The awards served as a timely opportunity to celebrate success and entrepreneurship, and lend credence and exposure to an often-misunderstood industry.