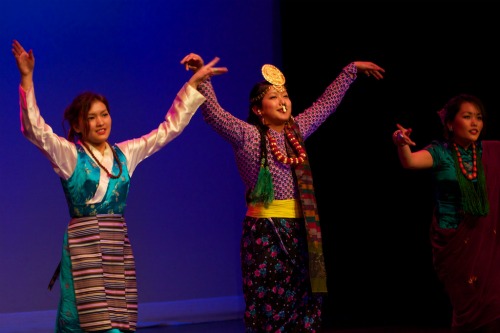 From 23rd – 26th February, University of Kent staff and students celebrated its diversity and multiculturalism in the annual four-day event, WorldFest.

Worldfest is an opportunity for the local community to get involved in activities on campus. Events included Fitness Fest with Guest instructor Sphinx from London; interactive workshops, dance classes and language tasters in the Worldfest festival tent and a world food and drinks market. From 6pm to midnight, international dance and music acts, including headline act Hullaballoo, took to the stage.

The festival’s finale on Sunday 26 February featured the WorldFest International Student Showcase, a colourful spectacle by the University’s student societies which took place in the Gulbenkian Theatre.

WorldFest is an annual event for staff and students supported by the University of Kent, Kent Hospitality, Kent Union and the Gulbenkian Theatre. Since its launch in 2009, it has raised hundreds of pounds for the charity, Seeds for Africa. To find out more, see www.kent.ac.uk/worldfest

Here are some of the comments and photographs from this year’s WorldFest:

‘I had a amazing refreshing and constructive time at the Worldfest. I feel very lucky and proud that it took place on my campus, while gathering people from different places. I got to see things that I have not seen before (like the traditional english dance) and I thank the festival for that!’
Oriana Jomby-Diaz, Pol.IR

International showcase:
‘ Just wanted to say a huge thank you for letting musical theatre be a part of the worldfest showcase again this year – it’s safe to say that all of those involved absolutely loved it! :D’

‘ It was such a fantastic turn out this year with a packed audience and loads of great societies – all very exciting!’
Lisa