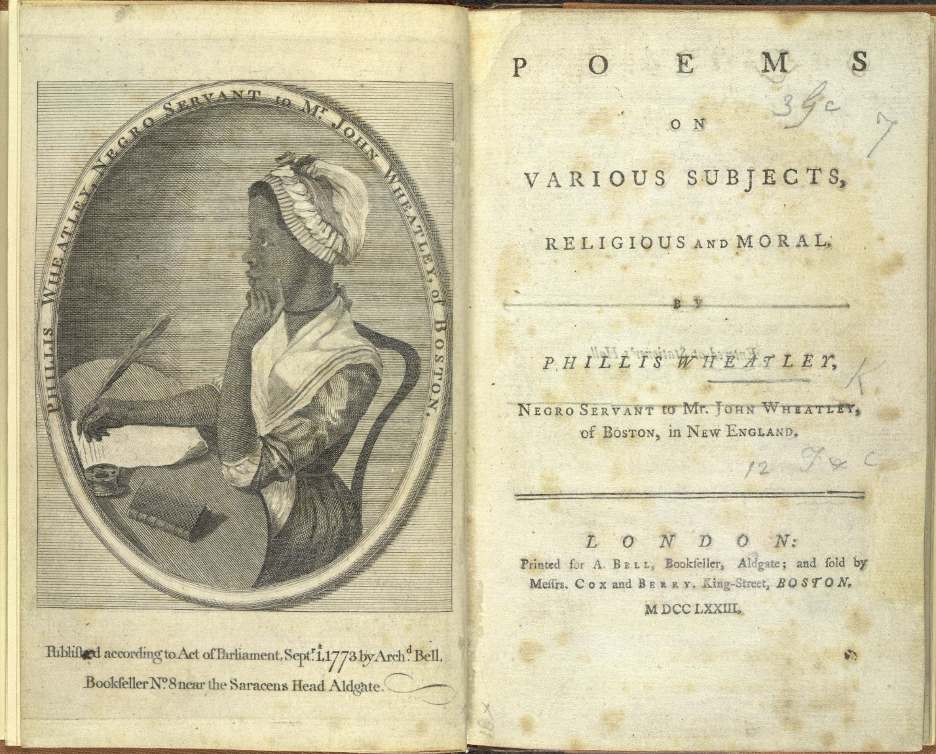 In an era where colonial Americans flocked to the banner of resistance and rallied behind the cause of liberty, the poetry of Phillis Wheatley Peters reminded her audience that for upwards of 200,000 individuals, independence from Great Britain did not equal freedom. Wheatley was stolen from West Africa as a small child and enslaved in New England; However, by the onset of the nineteenth century, Phillis Wheatley had become a household name amongst literate Americans. In fact, her talent was admired by societal elites from Boston to London, who frequently requested her presence. Standing shoulder to shoulder with Massachusetts Governor Thomas Hutchinson, John Hancock, and Dr. Benjamin Rush, Wheatley broke the barriers that excluded both women and enslaved people from social and intellectual conversations.

“On Being Brought from Africa to America”, likely Wheatley’s most famed piece from Poems on Various Subjects, simultaneously demonstrates the artistic and intellectual abilities of enslaved people and exposes the hypocrisy of slave-owning Revolutionaries. Christianized slaves were capable of praying, hosting and attending sermons, and singing hymns and spirituals with just as much vigour and consistency as their white peers, and Wheatley’s word seemingly argue that if God’s mercy is extended to all those who accepted him as their saviour, then equal civil rights should be guaranteed to all Patriots who honour America as their homeland. In the poem’s final couplet, Wheatley chides readers, “Remember, Christians, Negros, black as Cain, / May be refin’d, and join th’ angelic train,” hammering home the moral contradictions of slave ownership amongst the freshly revitalized faith communities of the Great Awakening. With eloquence and cautious emphasis, Wheatley contrasts God’s unprejudiced mercy with the attitude of indifference toward institutionalized racism that many eighteenth-century Americans possessed.

Wheatley was stolen from West Africa as a small child and enslaved in the household of Mr. and Mrs. John Wheatley. Although the Wheatley family never excused Phillis from her daily domestic duties, they quickly recognized the young girl’s academic inclinations. Alongside the Wheatley children, Phillis was educated in religious studies, geography, literature, and classical philosophy. As an enslaved African American woman with a burgeoning writing career, Wheatley became living proof that the value of Black bodies stretched far beyond the labor for which they were exploited. In the years following the American Revolution, the example set by Wheatley was invaluable to the fledgling abolitionist movement.

For more on Phillis Wheatley, check out her Age of Revolution object profile or see where she ranks in Top Trumps.