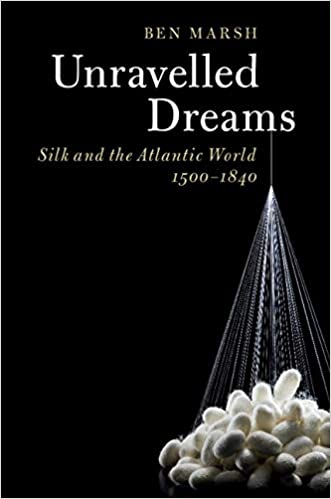 Dr Ben Marsh, Reader in History, has just published Unravelled Dreams: Silk and the Atlantic World, 1500-1840, with Cambridge University Press. Ben teaches a number of modules on American history which touch on the book’s themes, such as The Emergence of America, The British Atlantic World, and The American Revolution. Here he discusses the book’s genesis and the extraordinary present-day circumstances in which it has appeared. You can also read more about Ben’s new book on the Cambridge University Press blog and see him discuss it in a video here.

Last month marked a big moment for me, and one that all historians look forward to with a mixture of excitement and trepidation, which was the arrival in hard copy of a book I have just published. These moments bring strange emotions and senses – the arrival of a physical object that has packaged within it thousands of hours of our labour in archives, thousands more of our consuming and digesting books and articles in our field, hundreds (okay, maybe thousands) of hours of drafting, editing, indexing. And it all comes down to this single thing, with our name on it, a thing that we admire the smell of, and weigh in our hands much as we might a new born baby. A newly published book is both a birth and a death at the same time: it is a last parting of an author from a research project, and a first meeting for hundreds (okay, maybe tens) of readers in the future.

Having just experienced a three-minute karaoke going viral (which came about messing around singing musicals with the kids on a Sunday afternoon), the irony was not lost on me that my new unopened, unread book, that had taken ten years to write, had just been trumped in my own life narrative. A little part of me felt sorry for it – it deserved the book launch that had been cancelled, and to be visible in all good bookstores (okay, maybe some specialist academic bookstores), and now that wasn’t going to happen. Colleagues and friends joked that I had missed a trick because I should have held a copy up of the new book, or had it in the background of the viral video. If only we could rewrite history, right?

Strangely, in my case, the self-trumping of my own endeavour was fitting. My book is called Unravelled Dreams and it’s about trying to make something happen but failing. Specifically, it is about nations and empires who tried to raise raw silk in their Atlantic colonies but failed. While we know lots about the trademark commodities that were generated in the early Americas and went on to transform global commerce – Nahuatl (Aztec) gold, Caribbean sugar, Chesapeake tobacco, Southern cotton – history is sometimes quick to pass over the losers. Silk was in huge demand in Early Modern Europe, leading to the establishment of massive industries and technically complex weaving and design systems in locations such as Lyons (France) and Spitalfields (Britain), so it made sense that everyone tried their best to control the production and trade of the raw material. But, as the book explains, in spite of all the confidence and creativity shown by colonisers, some challenges could not be surmounted by bravado, print culture, or territorial conquest. The caterpillars who make the cocoons from which raw silk is reeled (Bombyx mori) were difficult to transport and to nurture, and the mulberry trees they feed on (Morus alba) only flourished in certain environments.

By paying attention to history’s losers, I argue, we can get a bit closer to the sense of contingency that people of the past felt about the households, forests, creatures, and societies around them. And we can get away a little from the obsession with commercial value and development around which much of modern history and colonialism was conceived. Assessing failed endeavours ought to be something we do much more, especially when it helps us to see the role of the environment and of ordinary people more clearly.