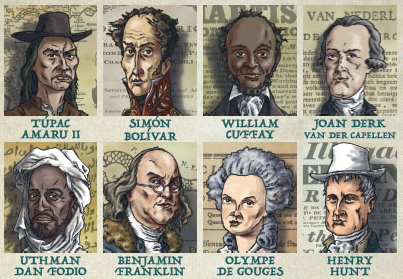 The card game is the result of a partnership between the Age of Revolution project and the University of Kent, with original artwork by ‘Polyp’ and a design by the official Top Trumps franchise. As a pack, the cards convey the drama, diversity, and the stakes at large in the social and political contests that gripped large parts of the world in the late eighteenth and early nineteenth centuries.

Six thousand packs are available to be sent, completely free of any charge, to UK schools as part of the Age of Revolution innovation grant, a national education project looking to foster greater interest in history.

‘Top Trumps: Great Figures of the Age of Revolution’ is aimed at students aged between 9 and 16, who will be introduced to the historical figures through the cards’ miniature profiles. Each includes a short biography and a series of scores for characteristics including: political prowess, radicalism, legacy, and social status at birth.

Its aim is to bring attention to the characters whose lives and legacies reflect the upheavals of the Age of Revolution between 1775 and 1848. They come from Britain, Europe, North and South America, the Caribbean, and Africa, and include philosophers, poets, writers, politicians, and campaigners who helped to shape the major conflicts, reforms, and revolutions of the era.

The deck was assembled by University of Kent historian Dr Ben Marsh following an international poll and consultation process. The figures include many household names from the great revolutions of the age – including the American, French, Haitian, and 1848 uprisings, and less familiar characters who offer exciting prospects for engagement in the classroom.

Dr Ben Marsh said: ‘A balanced understanding of History is essential not just in the classroom but beyond it, which is why it is so fantastic for Winning Moves and Age of Revolution to have worked with us in creating and delivering these to schools for free.’