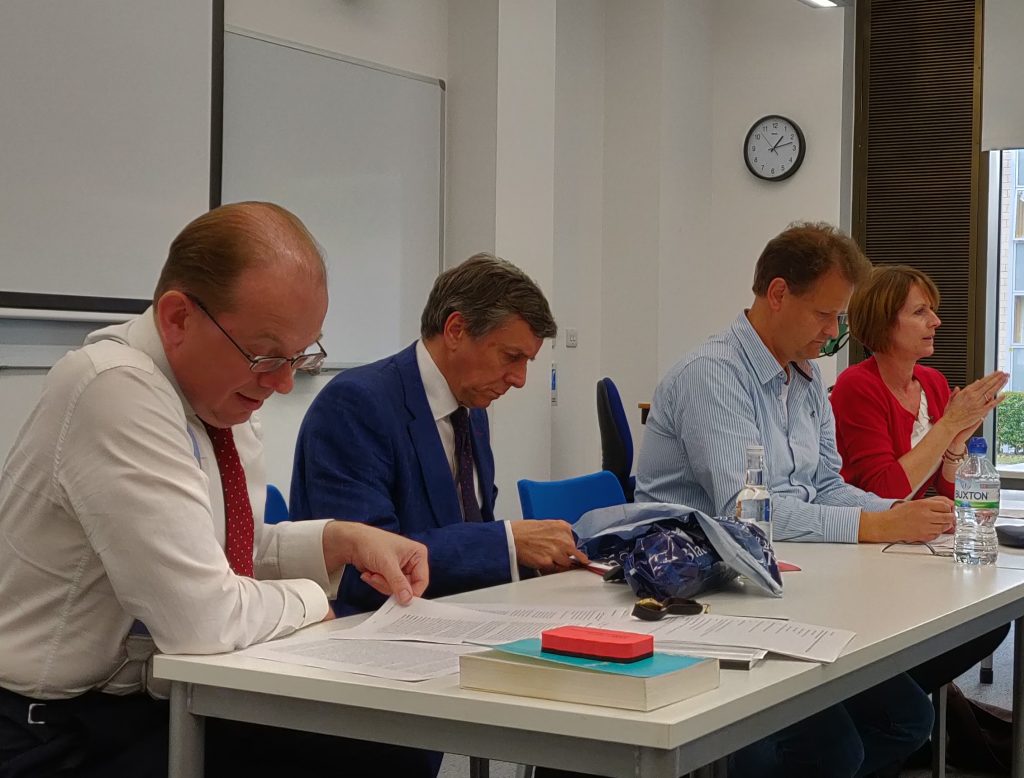 Earlier this month, the School of History held a lunchtime seminar to discuss the historical context of the Prime Minister’s controversial recent attempt to prorogue Parliament. PhD student Russell Moul (r.t.moul@kent.ac.uk) reports on the event.

On 28 August 2019, Queen Elizabeth II agreed to prorogue the Parliament of the United Kingdom under the advice of Prime Minister, Boris Johnson. Ostensibly, the suspension of Parliament was presented as a standard political procedure that would allow the Government to focus on a new legislative agenda following the selection of a new Prime Minister. Prorogation would therefore take place over a five-week period between 9 and 12 September to 14 October when it would reconvene for the Queen’s speech. However, commentators and politicians alike interpreted this as an attempt by the Government to stymie parliamentary scrutiny of its plans for withdrawing from the European Union ahead of the official deadline on the 31 October 2019. In an historic and unprecedented move, on the 24 September, the Supreme Court of the United Kingdom ruled that the prorogation of Parliament was unlawful. Lady Hale, the president of the court, plainly stated that the “Prime Minister’s advice to Her Majesty was unlawful, void and of no effect”. Ultimately, she added, “when the Royal Commissioners walked into the House of Lords it was as if they walked in with a blank sheet of paper.” Parliament was therefore never prorogued, a judgment that was made unanimously by the eleven Supreme Court judges.

Responding to the controversy generated by these events, the University of Kent’s School of History held a lunchtime panel discussion on 3 October 2019, where a range of speakers reflected on the historical significance of the PM’s prorogation efforts; the relationship between Parliament, the executive and the monarch; and the nature of sovereign power in the history of British politics more generally. The speakers, drawn from the School of History, consisted of Professor Kenneth Fincham, Dr. Leonie James and Dr. David Rundle, who shared a range of perspectives on this controversial topic through a reflection on late Medieval and Early Modern comparisons. The event was chaired by Professor Ulf Schmidt. While the discussion was lively and informative, it is not possible to replicate it here in full. However, highlights from the panel are worth further consideration.

In the seventeenth century, Dr. James noted, prorogation was, for the most part, relatively uncontroversial and in this sense, the public debate over the Government’s recent attempt to prorogue parliament seems surprising. During this time, prorogation was a common affair. Famously, Charles I prorogued Parliament in 1628 after it granted him the taxation he wanted. A year later, the king dissolved parliament altogether when some MPs refused to allow the speaker to dissolve the session on his orders and, in an act that was recreated in 2019, two MPs held the speaker in his chair. In response, Charles I ruled without parliament from 1629 to 1640. The events of this tumultuous period are well known, which has led commentators and MPs to draw parallels between them and the recent events at Westminster. Labour MP, Margaret Beckett, and former Prime Minister John Major warned the PM that such a political move “didn’t end well” for the seventeenth-century monarch.

Yet while such comparisons have easily lent themselves to today’s political situation, as Professor Fincham pointed out, not all of them have been accurate or necessarily helpful for the speaker’s overall aims. For example, the UK’s attorney general, Geoffrey Cox, criticised what he called “a dead parliament”, echoing Oliver Cromwell’s tirade against the Rump Parliament on the 20 April 1653, which he called “a factious crew” who were “intolerably odious to the whole nation” and should “in the name of God, go!” But rather than being a useful example of a decisive leader overcoming an ineffective parliament, such as Cox may have hoped to convey, Cromwell’s speech to the Rump was accompanied by an armed contingent who forced their way into the Commons Chamber in order to ensure its dissolution. It is unclear whether Cox was aware at the time of this historical detail or chose to ignore it.

For earlier periods, such as the fifteenth and sixteenth centuries, Dr. Rundle explained in his opening statement that prorogation was not an issue as parliament was only called to make specific decisions, mostly concerning taxation. Generally speaking, the crown was not expected continually to legislate, and could introduce some laws without recourse to statute. However, this did not mean parliament was always limited. Certain decisions required its approval, such as when Henry VIII called the Reformation Parliament between 1529 and 1536 to pass legislation that precipitated England’s break from Rome and the establishment of the Church of England. This created a powerful precedent for the events that took place in autumn 2019. Sovereign power may have largely rested with the crown, as it now does with the PM, but, at moments of epoch-defining decision-making, the executive needed to work with Parliament to achieve its ends.

In many ways, the current struggles between the executive and the legislature reflect older battles between the monarch and parliament, as well as highlighting historical tensions between decision making powers in England and their relationship to other kingdoms, such as Scotland. The decision by the Inner House of the Court of Session, Scotland’s supreme civil court, to overturn the earlier ruling by the Outer House of the Court of Sessions, English and Scottish civil courts of instance, which ruled that Johnson’s prorogation was unlawful, was a reminder of a longer, more contentious history between England and Scotland, especially when related to constitutional matters. While defenders of prorogation were quick to argue that there was little difference between English and Scottish law, the reality is that Scotland has a distinct constitutional tradition that played an important role in shaping the Inner House’s ruling. This is enshrined in key differences between the English Bill of Rights of 1688 and the Scottish Claim of Rights of 1689. Both documents were formed in response to the events of the Glorious Revolution in 1688. Whereas the Bill of Rights mainly codified existing legal principles and stated that “parliament ought to be held frequently”, the Claim of Rights added that “parliament ought to be frequently called and allowed to sit.” The implication is that Scotland’s constitutional tradition ensures that the executive’s power is not unlimited and cannot be exercised contrary to the law of the land.

Despite the similarities between these historical events and the present situation, there is one important difference. That is, the role played by public opinion. During the seventeenth century, and particularly in the later 1670s, Dr. James noted, public opinion became an increasingly important political factor in the parliamentary crisis over the succession. Professor Fincham added that, just before the Civil War started, the official censorship of printed materials collapsed, which allowed for more diverse opinions to enter public discussions. Similarly, in order to increase recruitment, both Crown and Parliament attempted to win greater support from the public. During earlier periods, as Dr. Rundle explained, there was nothing resembling the type of ‘public sphere’ we understand today, but this did not mean that the monarch did not seek broader opinion. In fact, the fear of rebellions meant that the king would attempt to engage with a form of ‘public’ opinion in order to keep the pressure off. Whether recent events will change the public’s historical perception of the unwritten constitution remains to be seen. But what can be said for certain in what is an uncertain time is that the prorogation of parliament in 2019 will inevitably lead to much spilt ink on the pages of hundreds of history PhD theses in the future.