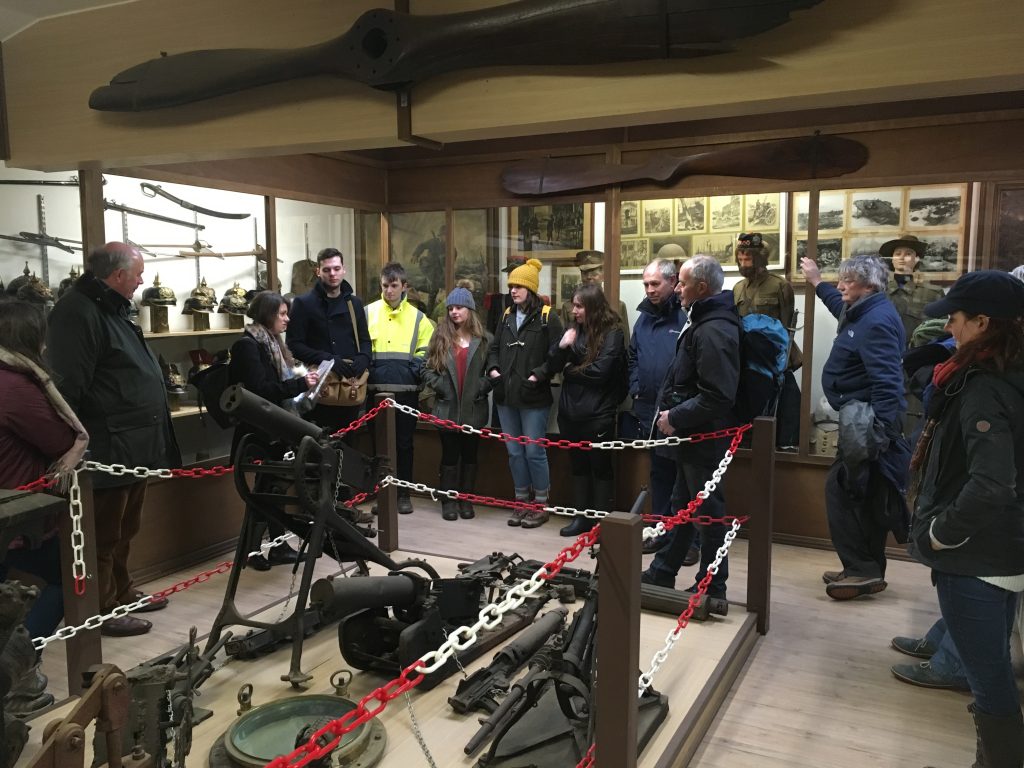 Earlier in the month, 11 students (8 MA and 3 PhDs) and 4 members of staff visited Ypres in an exciting and valuable trip. Students were exposed to different museum interpretations of the First World War, visiting four separate museums, including the In Flanders Fields Museum Ieper.

Dominiek Dendooven, the Deputy Curator, gave an introductory session, which helped annotate the students as to the approaches and underpinning principles of the institution. This was followed by a visit to the Passchendaele Memorial Museum at Zonnebeke, where Projects Co-Ordinator Debbie Manhaeve gave an overview of the museum’s activities and mission, as well as providing an excellent insight into its archives. Finally, the last two institutions were private concerns, being the Hooge Crater Museum and the Hill 62/Sanctuary Wood Museum. These were deliberately chosen, as the Hooge Crater Museum reflects what dedicated local historians can achieve and the Sanctuary Wood Museum is run almost solely for profit and very little has changed from when it first took visitors in the early 1920s.

The aim of the trip was to expose students to different commemorative cultures, achieved through exploring a range of different memorial sites. Cemeteries and memorials of the Commonwealth War Graves Commission were explored and subsequently contrasted against the French, Belgian and German counterparts. Professor Sophie de Schaepdrijver, formerly a Leverhulme Visiting Professor in the School, was particularly helpful, as she interpreted the German cemetery at Langemark absolutely brilliantly, proving the students with fascinating insights. Some students were asked to prepare short introductory talks at certain spots, with Nick Perry, Amy Harrison, Natasha Silk, Julian Daggett, Matt Pearce and Brad Robb providing intriguing and informative accounts, including the stories of relatives from the war, and their graves and sites of commemoration.

Finally, students were trained to act as guides, as part of our AHRC-funded centre, Gateways to the First World War, which is leading a project that provides student guides for the Anglican Church of St George’s. Students took visitors on the trail of the original generation of pilgrim-tourists in the 1920s. This was led by Amy Harrison and Natasha Silk.

This was a great trip, thanks to the Faculty and school funds gained, which were invaluable.