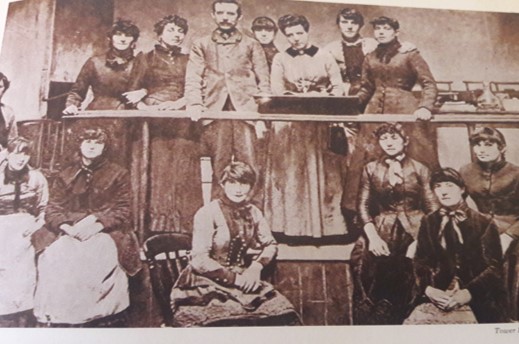 On 5th July 1888, approximately 1400 female workers walked out of Bryant and May’s match making factory in Bow, East London, in protest over low pay and poor working conditions. Each woman and girl worked 12- to 14-hour days in hot and unventilated rooms to make and pack match boxes in order to earn an average piece rate wage of around 8 shillings per week; skilled male labourers could expect around 40 shillings. Prompted by the perceived unfair dismissal of one of the workers, one woman reported that the strike ‘just went like tinder, one girl began, and the rest said ‘yes’ so out we all went’. Match production stopped for 16 days. The strike finally ended after the workers accepted a number of concessions offered by the company. These concessions included the abolition of the system of fining workers for being late, deductions from wages to cover cost of paste and brushes and the recognition of the Union of Women Match Makers by management. The match girls’ strike, as the 16 day walk out of women workers famously became known, shaped the future of Britain’s labour movement. As the first strike by unskilled women workers in Britain, this moment was hugely significant in the rise of New Unionism of the late 1880s and 1890s. It was the prelude to a wave of strikes that swept the country, the most famous of which was the Great Dock Strike of 1889. Workers across Britain were no longer willing to accept their poor working conditions and began to demand more from their employers. This wave of strike action resulted in the unionization of tens of thousands of unskilled and semi-skilled workers and sowed the seeds of the Independent Labour Party (ILP). Moreover, the Union of Women Match Makers had a long legacy; it was one of only a few unions that survived the turbulent years after the peak of New Unionism and was still going strong into the 1930s.

Yet, the strike was also important for highlighting and ultimately improving the dangerous working conditions that Bryant and May’s management concessions did not address. Match making was considered part of the ‘dangerous trades’ under the Factory and Workshops Acts due to the fact that highly toxic white phosphorous paste was used to make the hugely popular Lucifer ‘strike anywhere’ matches. Renewed media attention on Bryant and May following the strike highlighted cases of necrosis of the jaw – ‘phossy jaw’ – among both male and female match workers resulting from exposure to the white phosphorous. The resulting government inquiry revealed the horrors of the disease. One testimony stated: ‘In a certain town I dug out cases of men and women, hidden away in the slums – piteous cases they were. One woman had completely lost her lower jaw, a young girl at earlier stages was constantly in great pain while her suppurating jaw bone was gradually decaying.’

This spectre of an identifiable industrial disease was a powerful weapon not only in the political struggles around working conditions, but also in debates over the degree to which the state should regulate the twenty five match making companies across Britain. State regulations of the late 1890s enhanced worker hygiene through the provision of soap, water and free toothbrushes and toothpaste; improved factory ventilation to prevent phosphorous fumes spreading all over the factory, as well as the separation of dangerous manufacturing processes; and provided medical examinations of anyone with reported toothache. It was a legal requirement for all match factories to employ a resident dentist by 1900 and Bryant and May employed one from 1898. Yet, some match making firms pushed back against new regulation. The underreporting of cases of workers with phossy jaw was rife in the Bryant and May factory. There was also a strong suspicion of collusion between medical practitioners and employers to conceal phossy jaw cases and evidence of at least one case of company intimidation by threats of lost income. Mrs Lean, whose son had died of phosphorous necrosis, was told ‘if I called another doctor in, the pay (ie the sick pay from the firm of 29 shillings a week) would be stopped.’ Prohibiting the use phosphorous in match making production would have decisively ended phossy jaw outbreaks, but such action was quickly dismissed because ‘strike anywhere’ matches were so popular and formed a vital part of Britain national and global trade. Phossy jaw only disappeared as an industrial disease once phosphorous was outlawed in 1910, but the effects of the discussions and events of the preceding decades, and indeed those who took part in them, should not be underestimated. Historical debate has centred on the role of the female workers of Bryant and May in initiating and sustaining strike action and in shaping the fight for better working conditions. Early historiography portrayed women as passive victims, who were only led to action by the campaigns of Annie Besant and other leading middle-class Fabians of the period. Such work largely relied on Besant’s autobiography and documents from the firm, which of course present a rather narrow view of the story. More recent historical work, however, has argued that the workers themselves were central to securing better rights and conditions and has attempted to reconstruct their own experiences from scant evidence. Securing the historical legacy of these women is ongoing, not least by their ancestors. More on Sarah Chapman, one of the match girls, can be found on the blog of the East End Women’s Museum: https://eastendwomensmuseum.org/blog/2018/3/13/sarah-chapman-matchgirl-strike-leader-and-tuc-delegate

Louise Raw, Striking a Light: The Bryant and May Matchwomen and their Place in History (Bloombury, 2011)