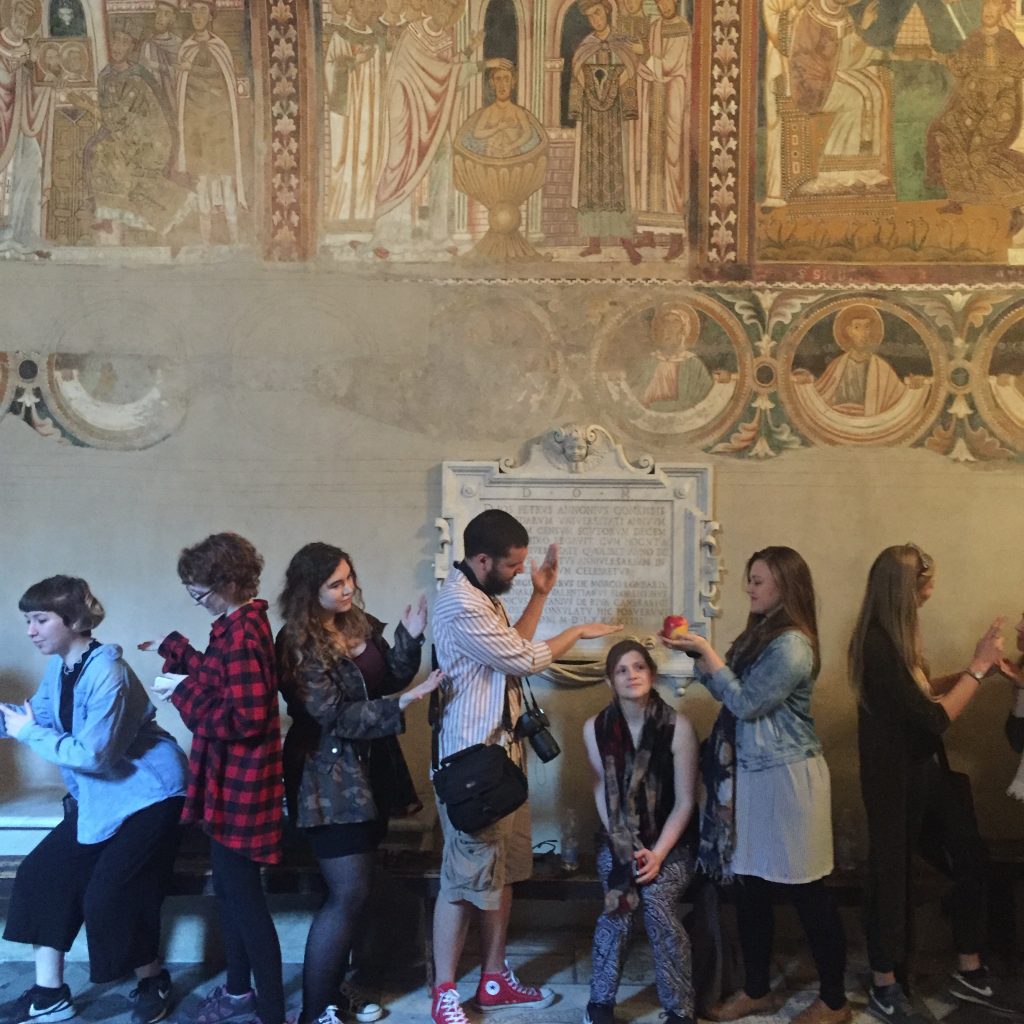 In early April 2017, Dr Emily Guerry took fourteen of her third-year students from her special subject module, ‘Saints, Relics, and Churches in Medieval Europe’ (HI 6058), on a four-day fieldtrip to explore the material culture of medieval Rome. The School of History generously subsidized the cost of travel and accommodation.

“When we arrived in the early evening, the students checked into their hostel near Termini and we all headed straight to the Forum to get a sense of the city of Rome– that still-smoking hearth of culture. Our itinerary was designed to proceed both chronologically and geographically through the development of the Christian capital so our first morning was packed with time spent in the Palatine Hill and the Capitoline Museo, followed by an afternoon in the Pantheon (which was converted into a church dedicated to the Virgin Mary in the sixth century). Next, we examined the first major Rome house-church female cults located Santa Pudenziana, Santa Prassede, and ended our day with a special private tour of the loggia (with captivating city views) atop Santa Maria Maggiore on the Esquiline. On our second morning, we began by spending two hours inside the stunning church of San Clemente and descended into its many layers of archeological history. Then we ventured to the Lateran for private visit of SS Quattro Coronati thanks to the Augustinian nuns (and performed our very own re-staging of the Donation of Constantine), followed by a pilgrimage to the Sancta Sanctorum, wherein four enterprising students actually acquired an indulgence! We spent that in Trastevere to make a private visit– with generous thanks to the Clarissa nuns– to Pietro Cavallini’s monumental Last Judgment fresco in Santa Cecilia, which is said to embody the ‘turning point’ between the transformation of Gothic painting into the ‘Renaissance.’ We ended this special day by looking at the amazing spolia in Santa Maria in Trastevere– purportedly the earliest location for the Roman cult of the Virgin– and marveling at its resplendent medieval mosaics. We spent out last day wandering through the Vatican museums, where we came face to face with dozens of sacred and sublime objects from our course, including early Christian sarcophagi, cult statues, and even Michelangelo’s wall paintings in the Sistine Chapel. In the end, our trip was an awe-inspiring intellectual adventure. The students encountered and examined some of the most transformative examples of church architecture, painting, and sculpture in the history of art and architecture in Rome. We are all so grateful to the School of History, especially Jenny Humphrey, for providing us with this once in a lifetime opportunity.Grazie mille!”