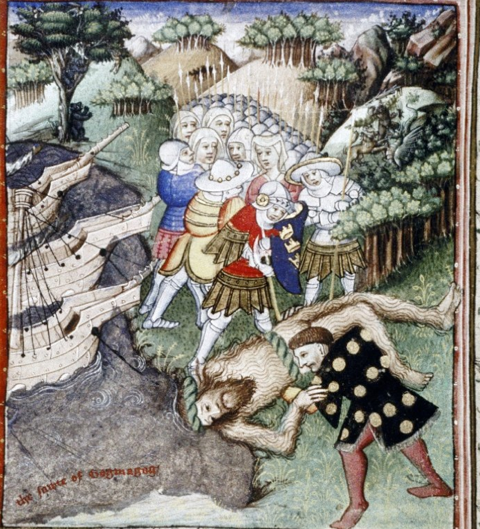 Congratulations to Dr Alixe Bovey, Senior Lecturer in Medieval History in the School of History, who has been awarded a British Academy Mid-Career Fellowship worth £111,000 for a project titled “Giants and the City: Mythic History as Material Culture in London from the Middle Ages to the 21st Century.”

This fellowship scheme supports outstanding individual researchers and the promotion of public engagement and understanding of the humanities and social sciences. It offers one year of funding for completion of a major piece of research, and Alixe has received one of 43 Fellowships awarded across the country for the next academic year.

During her fellowship, Alixe will investigate the Gogmagog legends in British mythic and material culture from the Middle Ages to the 21st century. Her research begins with Geoffrey of Monmouth’s History of the Kings of Britain, written c. 1150, which opens with the tale of Brutus and his men, all refugees from the Trojan war, landing on an island inhabited only by giants. Naming the land after himself, Brutus and his champion Corineus set about exterminating the giants, the last of whom was the hideous Gogmagog. Over several centuries, as this tale was reworked, Gogmagog was gradually transformed from a victim of conquest into a celebrated guardian of the City of London, alongside his erstwhile nemesis Corineus. From the 15th century, fabricated giants greeted monarchs as they entered the City, and by the early 17th century, giants fashioned from wicker and papier-mâché featured in the parades that accompanied each new Lord Mayor between Guildhall and Westminster. These ephemeral figures were set up in the Guildhall until 1708, when they were replaced with timber statues. Destroyed in the Blitz in 1940, new timber giants were installed in 1953. In 2006, they once again joined the Lord Mayor’s parade, as wicker figures made by the Worshipful Company of Basketmakers.

In tracing the giants’ history from their invention to their most recent reincarnation in 2006, Alixe’s project will be centrally concerned with understanding the transmission and transformation of this myth across time; the role played by material artefacts in maintaining its vitality; and why, how, and for whom this remarkably dynamic tradition has proved useful.