The annual meeting of the Preimplantation Genetic Diagnosis International Society (PGDIS) took place at Woolf College, Canterbury campus from 29 April to 2 May. It was attended by more than 300 experts, including IVF pioneer and television personality Professor Lord Winston. 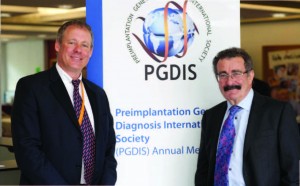 The event was attended by more than 300 experts, including IVF pioneer and television personality Professor Lord Winston.

His keynote address and other conference discussions, such as the impact of IVF on embryonic and long-term health, received media mentions across the globe, including the front cover of the Daily Mail, Guardian online, the i, the Washington Star, ITV and Nursing Times.

The conference reunited many members of the original research team, led by Professor Winston and Professor Alan Handyside (currently an honorary member of Kent staff), which pioneered pre-implantation genetic diagnosis (PGD) in the 1980s. Professor Darren Griffin, now Professor of Genetics in the School of Biosciences, was one of that team.

Darren Griffin, who was also the conference chair, gave a presentation entitled ‘Counting chromosomes: from sexing to Karyomapping’ as part of a session looking at early discoveries in the history of PGD and how they have led to more recent innovations.

Alongside debate and discussion, the conference showcased announcements of advances in the science of PGD – which involves the genetic profiling of embryos prior to implantation and can be used for the diagnosis of specific diseases.

Darren said afterwards: ‘PGD continues to be an exciting, and sometimes controversial area of medicine. This conference addressed the past, present and future of this ever-evolving area of science. We have had a lot of good feedback from this meeting whose legacy will be the place in which a number of “firsts” were announced.’

He added: ‘I am grateful to all the team, particularly my lab and students on the MSc in Human Reproduction for making it happen.’

This entry was posted in news. Bookmark the permalink.