This week we have finally been able to start collecting patient files from health records for use within the SUTO project. It was quite difficult to get this approval though, with a number of people disagreeing about the type of ID needed for doing so – something that seems to happen a fair bit and unfortunately can thus stall progress. It is of course good to see so much being done to protect patient confidentiality though, something that will hopefully be continued into the future.

Having got approval we have now been able to start collecting patient files in order to find and fill in patient information that wasn’t available on the online databases. Having both a plentiful supply of incoming requested paper files, as well as those we now collect each day, our work is certainly speeding up. This is further aided by us having already filled in as much patient information as possible in our spreadsheet by using the online patient databases. Usually only a few key points of information therefore has to be found in each paper file. However, sometimes the databases and files do not always showing matching figures. For example, sometimes a patient’s BP may fluctuate a number of times after admission and so a recording retrieved from the online databases may need to be replaced with one from the paper file in order to better match the time at which the rest of their information that we are entering was measured. I still feel as if I’m improving at knowing where to look for all of this information though, especially with how to calculate factors such as patients’ weight using their medication levels. To illustrate, I can now recall that the thrombolysis treatment Alteplase is given at the rate of 0.9 mg (bolus & infusion) per bodily kg.

We are also still going through the TIA letters for the OSA project, recording patients’ TIA presentations, risk factors and medication. It’s now getting easier to categorise these presentations because the symptomology terms used within patient descriptions are generally re-used by the same clinicians. There are still a few terms that I need to record and check at the end of the week though. For example, someone described as having ‘heavy’ limbs should be categorised as having motor loss (weakness), unless the term ‘dead’ feeling limbs is also used which would further indicate paraethesia (numbness). I have also begun to notice a fair number of the TIA patients who have undergone sleep studies and had Epworth scores recorded which will hopefully be useful for later on in the project. The Epworth scale can indicate people’s levels of sleepiness by asking how likely they are to fall asleep in different circumstances (see below). This is thus a valid way of detecting OSA due to the disorder often causing daytime sleepiness and fatigue. The AHI (Apnea Hypopnea Index) scale can then also be used to record their actual amount of apneas per hour during a night of sleep, indicating the disorder’s severity.  I’m really looking forward to seeing how this project progresses and to finding out how prevalent OSA really is in the neurovascular clinic. 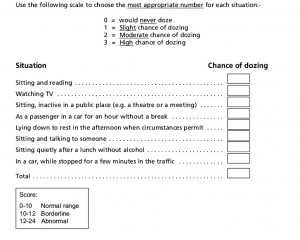 This entry was posted in Emily Pettifor. Bookmark the permalink.