Week 4 and we have stacks of files!

I’m now at the start of my fifth week here at the William Harvey and halfway through my placement. Last week we finished filling in all the patient data that we could get off the computer, so now we’re down to the hard bit of relying of patient files to fill in the gaps. Whilst some files are really detailed, others aren’t as much, so it can be quite annoying when you’ve filled in almost all of the columns and then realise that one detail, like the patients weight is missing. It can also be quite difficult when it comes down to determining a patients score on the modified Rankin Scale (mRS). mRS is used to measure a patients disability and it ranges between 0 (no symptoms and no disabilty) and 6 (dead). In our spreadsheet we have to enter a patient’s pre-morbid (pre-stroke), discharge and 3 month post discharge mRS. These can be recorded in the Ocupational Therapy notes or sometimes they are noted down in a random place in amongst the patient’s other notes. More often than not though none of the 3 required mRS value are written so we have to deduce from the notes what the values are. Since many of the patients are older we cannot simply assume that they have an mRS of 0 as many of them are likely to have some impairment. For example, it may be written that a patient arrived to an appointment walking with the aid of a stick which would indicate an mRS of 2 or 3. 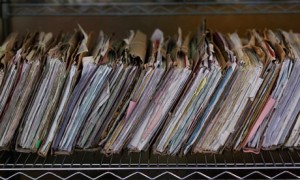 Midway through the week another huge lot of files arrived so we’re having to find different places to store them. We now have files filling up one large shelf and piled underneath a table. We’re still waiting on our ID cards, but fingers crossed that we’ll have a breakthrough this week!

We’ve made further progress with the OSA study and have begun taking it in turns to input groups of 10 anonymised letters. The letters are about patients who have attended a TIA clinic after being referred by a doctor, however not all the patients have necessarily had TIAs, which make it both very interesting, and also a little tricky.

These past four weeks have flown by and I’m now halfway through my placement. Everything has become quite familiar here and so far it’s been really interesting to see a work environment that I haven’t experienced before. I’m looking forward to the next four weeks and I’ll see you the same time next week with another blog post!

This entry was posted in Charlotte Simpson. Bookmark the permalink.