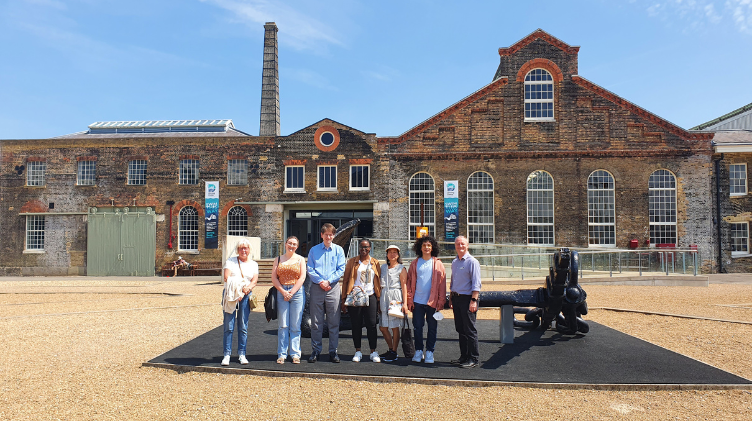 Until it’s closure in 1984, the Historic Dockyard in Chatham was a significant facility for ship building in Britain for four hundred years – in it’s time over 400 Naval warships were built here. Since the Navy left almost 40 years ago, the Chatham Historic Dockyard Trust has been running it as a very successful visitor attraction. Visitors to the site have an overwhelming 80 acres to explore, so there is much to see and do!

We were treated to a fascinating tour by Stephen Billington, the Head of Lifelong Learning, who was incredibly knowledgeable about the site, its history and architecture, with plenty of stories to share, and places to show us behind-closed-doors! The site has three warships accessible to the public: HMS Gannet – an anti-pirating Naval ship from 1878; HMS Cavalier – the last remaining World War Two Destroyer in the UK; and HMS Ocelot – a Cold War era submarine. We were delighted to be able to board the Ocelot, look around the rather confined spaces and scramble through the hatches that divide each section. It was very hard to believe that 65 men used to live and work in the submarine for several months at a time (without access to showers!) – as someone who can get a little claustrophobic, a 10-minute walk-through was more than enough time spent on board!

We visited the ropery – the longest brick building in Europe at a quarter of a mile – which is still in use today producing artisan rope for many consumers, from private boat owners to cricket clubs. Entering at one end, you can barely see the far wall, and workers use bicycles to travel up and down the ropery floor – the size of the building really is staggering! We also visited a few of the Dockyard’s impressively interactive exhibitions, including Diving Deep: HMS Invincible 1744 which showcases finds from the archaeological excavation of the ship, and Command of the Oceans where you can discover how ships, including HMS Victory, were designed and built. Visitors can also view the timbers of the HMS Namur (1756), which were intriguingly laid to rest beneath the floor of the Wheelwrights – a very recent and remarkable archaeological discovery.

As well as a visitor attraction, the Dockyard is also a successful business, renting out much of the space on site to private residents and the University of Kent for teaching space. It is also very popular for use in filming TV shows and films, and we saw Dockyard staff members dressed in 1960s midwife costume, giving some of their incredibly popular Call the Midwife tours – much of the series has been filmed on location at the Dockyard. Stephen relished in showing us some filming hotspots, including a few spaces that aren’t normally publicly accessible, and telling us stories of their experiences with film stars!

After our tour and lunch, students could choose between three different talks – on Marketing and Business, Filming and Arts or Collections and Architecture. Students gained invaluable insight on how the Dockyard operates in these different areas, and we are so very grateful that the team were happy to cater their experience day towards a number of students with varying careers ahead of them.

It really was a thoroughly enlightening and enjoyable day for everyone who was lucky enough to attend! A big thank you to Stephen Billington and his colleagues for organising and hosting us for the day, and for supporting the EP Scheme!