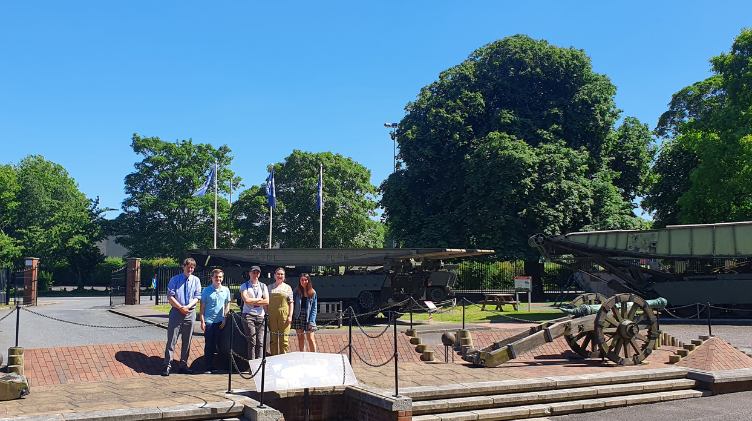 The Royal Engineers Museum was founded in 1875, and the museum has been located adjacent to the Royal School of Military Engineering, in its enviable position close to the Chatham Dockyard, ever since. The collection is considered one of the most important military collections in the UK, holding everything from a V2 Rocket, to large collection of Victoria Cross medals.

The morning was spent on a behind-the-scenes tour of the storage and archives, a chance to see exciting items from the collection which aren’t displayed to members of the public, which is certainly a few hours very well spent for any history enthusiast! The Collections Manager first took us into the (rather chilly!) paper archive, temperature and humidity controlled to perfection for conservation of the collection, as she explained. We got to look at a selection of soldier diaries from the First World War, photos taken during the Anglo-Zulu War, an album of personal photos taken by the Special Brigade in the First World War, before being shown a selection of maps, including a beautifully detailed one of Corsica in the 18th Century as well as a map charting the movements of the Special Brigade in Europe in 1944-45.

Next up – the highlight of the day, judging by the excitement on the faces of all student attendees! – was the armoury. We were provided with rubber gloves and were able to (carefully!) pass around a number of guns from the collection, including a beautifully ornate 19th Century rifle, an incredibly heavy Bren light machine gun from the Second World War, and a Yugoslavian AK47 which was used in the Rhodesian Civil War. We were also shown a selection of Victoria Cross medals, before having the opportunity to hold one which was awarded to a soldier from the First World War who had died in a tunnel cave in whilst trying to save injured comrades – certainly a reflective and emotive moment for us all.

Lastly, we made our way over to one of the larger storage areas, housing some of the weird and wonderful items from the collection in what felt like endless bays of roller racking. Hundreds of items of military uniforms lined several aisles of racking, including boots worn by soldiers in the Dunkirk evacuation, furniture from the Summer Palace in Beijing, and even a fly that was believed to have crawled across General Gordon’s face after he had been killed!

After lunch, the Director of the Museum spoke to us about starting a career in museums and the different pathways which are open to those wanting to build a career in the industry. She shared plenty of hints and tips for securing entry level positions in the sector, and happily answered a number of questions that were asked. We were certainly incredibly grateful to be able to speak to someone who has not only successfully navigated her way up to the position of Director of the museum, but who has very clearly enjoyed every step of her journey to get there.

It was a truly fascinating, enjoyable and insightful day, and one that any history enthusiast would be thrilled to be a part of! A huge thanks to Danielle Sellers, the Collections Manager at the museum, for organising the day and leading such an amazing tour, and to Rebecca Nash, the Director of the museum, for an enlightening talk on careers in the sector.