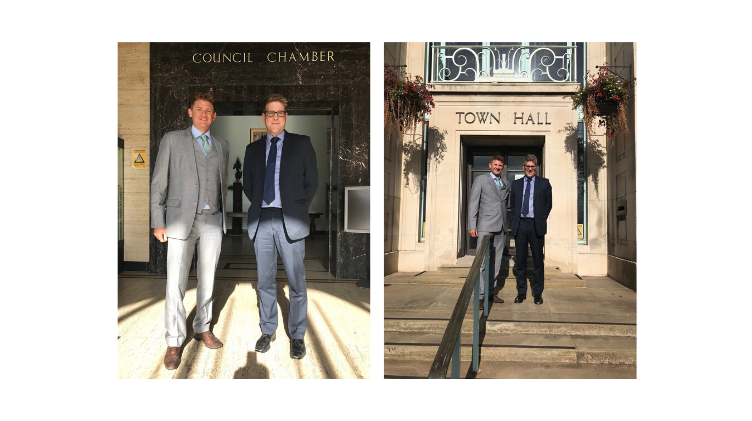 For the last three academic years, Tunbridge Wells Borough Council have kindly offered EP students the chance to shadow the Chief Executive, William Benson and the Director of Change and Communities, Paul Taylor.

For 2018-19, Alister Brady (School of Politics and International Relations) was given the chance to shadow the Chief Executive and recently provided the EP team with his reflections.

Alister commented that he ‘had an extremely full itinerary from the first minute arriving at the Town Hall’. He first attended a Management Board, where the Heads of Departments detailed the working situations that need to be addressed through the work. This was followed by the chance to attend the Calverley Square Steering Board Meeting, where Councillors and Heads of Departments discussed strategy in relation to the Calverley Square Project.

During the second day, Alister witnessed the Chief Executive attending a media session, where he was filmed delivering a Q&A session. ‘This gave me great insight into the ranges of skills that a Chief Exec needs’, Alister commented, ‘to observe how natural he was in front of the camera whilst being interviewed showed me the level of skill I would need in advancing my own career aspirations.’ Following this, Alister attended a Cabinet Meeting, involving local Councillors, leading onto the Deputy Lieutenant of Kent’s Retirement Lunch, where he met various individuals, including the Mayor and Mayoress of Tunbridge Wells. This provided Alister with a key insight into networking, which led onto the unveiling of a World War II Civilian War Memorial.

“I don’t think the work shadowing experience could have gone any better…Being able to sit through meetings which involved confidential information, demonstrated the amount of access I would have when work shadowing a Chief Executive of a council. Seeing how these meetings were chaired, its format, and observing negotiating techniques, gave me insight which I will use in my eventual career. Throughout, I gained access to contacts in local government, meeting these individuals and understanding their roles in the team was extremely enjoyable.”

The EP Team would like to thank Tunbridge Wells Borough Council for providing this great experience.