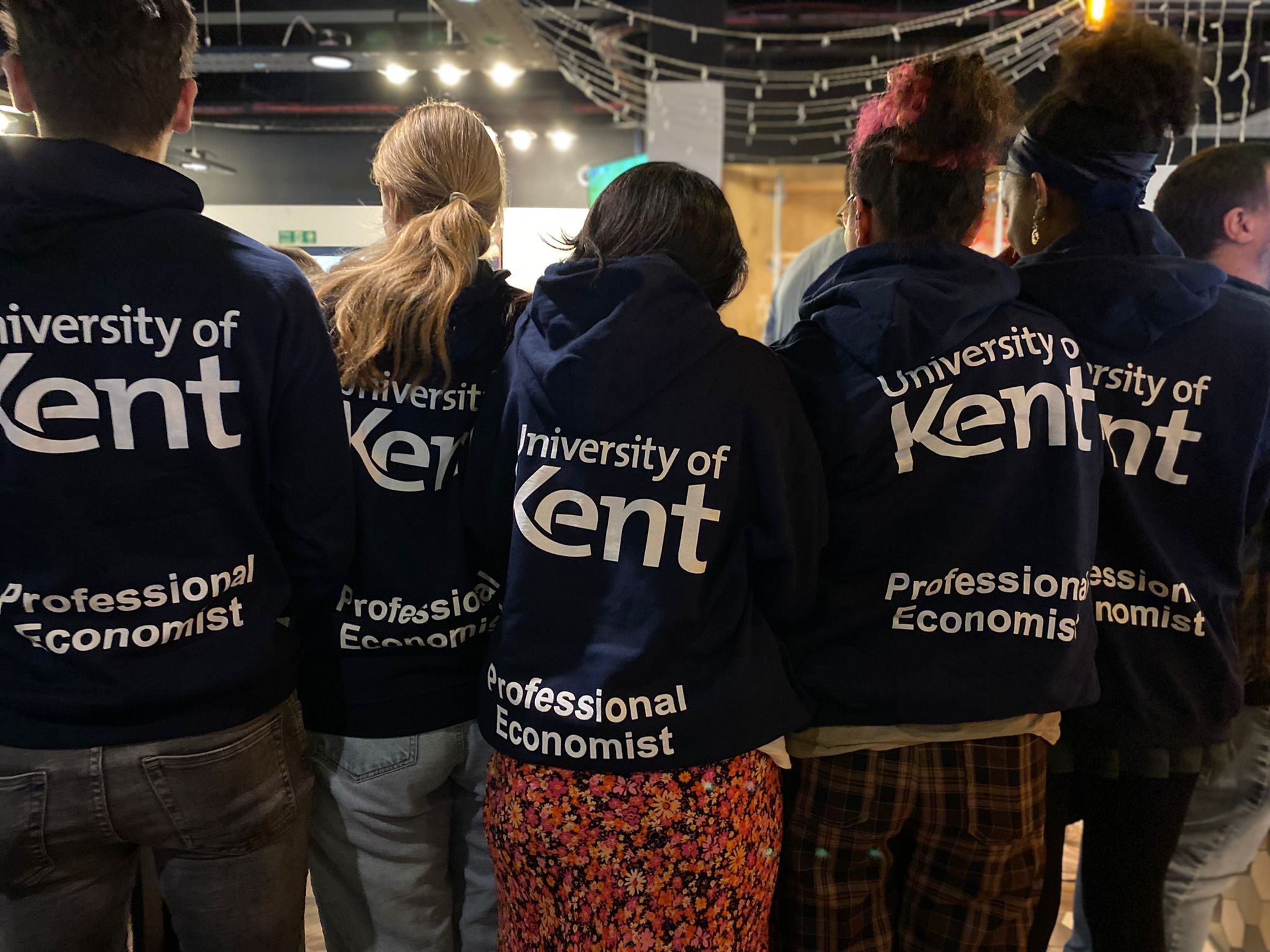 Over the 5th to 9th September, 270 of our apprentices joined us from all over the country for 5 days of teaching, networking and socialising including our Inaugural keynote Event and for the very first student led Apprentice Ball.

It was with anticipation and joy that we welcomed, for the first time, four year groups of Professional Economists gathered in Canterbury on the 5th for a week of intensive teaching, induction for the newest, and briefings on the year ahead.

Alongside the delivery of key materials, we had devised a number of social events to help build a strong community too. This is often absent in the distance learning setting but our organisers made the most of having everyone in the same place! On Tuesday the 6th, we launched our Inaugural Keynote Event with two guest speakers, Professor Jagjit Chadha and Mark Preston, giving engaging and timely presentations to the apprentices. Jagjit, previously Professor of Economics at Kent, currently the Director of the National Institute of Economic and Social Research (NIESR), delivered his thoughts on Central Bank independence with a particular focus on the UK, in a frank, entertaining but informative 30 mins based on his new book The Money Minders: The Parables, Trade-offs and Lags of Central Banking. His central message formed an impassioned call to the next generation to defend both the independence and unity of purpose of central banks. Mark, a successful banker with extensive experience in trading for Barclays, J.P Morgan and others, followed this with his personal reflections on the impact that the rapid rise of computing power has had in shaping the commercial financial sector. In particular, he highlighted the impact on the rise of financial derivatives markets, the computing arms-race between banks and regulators, and the eventual burst of the balloon in 2008. Reflecting on both his talk and the extensive engagement from the audience which followed, Jagjit said:

‘The previous day I had sat on a panel with Mervyn King and Paul Tucker talking about our reflections on 25 years of central bank independence. And people like us – those well over 50 – remember the arguments and the nature of that victory of economics over politics very well.  So much so that our arguments can seem like rather obvious received wisdom when we get together.  But when one gets a chance to speak to the next generation – such as the apprentice economists – one realises how important it is to pass on reflections and arguments from the past to the next generation so they can make up their own minds and drive policy in the direction that best suits their views.  This is a really fine group of economists who are clearly being well taught on principles, my hope is that they can persuade our political masters better practice.” ‘The University of Kent prepared me for a fascinating and fulfilling career in Financial services.’ Mark summarised ‘ It was a great pleasure to meet such an enquiring group of undergraduates and explain to them how this economics grounding enabled me navigate through 40 years of huge change. Their questions and comments I received from the audience tells me that Kent continues to prepare students well and they are ready to confront the continuing change we expect to see in the global economy.’ The social committee representing all of the Economics apprentices, decided on the social activities for the week – football, netball, rounders and a sports day over several afternoon sessions. This definitely harnessed our apprentices’ competitive side but it was a great way foster some team spirit.

Our final event of the week was the Annual Professional Economist Pub Quiz, created as is tradition, by Professor Iain Fraser, who asked some fiendish questions of the 32 teams that took part. Rounds included famous female economists, a music round which ended in some excellent karaoke and of course the mention of Iain’s new favourite band Wet Leg.

Huge congratulations to all of the winners:

Best team name went to Cost of Quizzing Crisis, in joint 2nd place we had BOGA and Good Vibes, but the overall winner of the 2022 Professional Economist pub quiz, was One Liz in … who barely dropped a point!