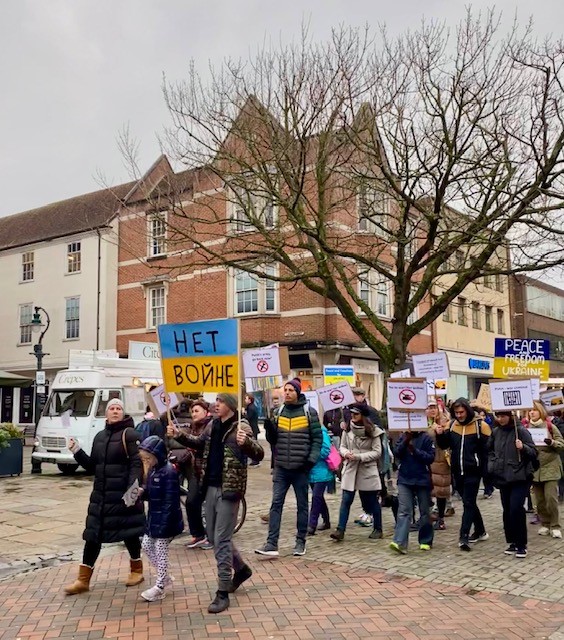 Earlier this year Dr Olena Nizalova, who is from Ukraine, helped family members escape to the UK. Since then she has been heavily involved in incentives to accommodate refugees locally. We asked her to update us on her thoughts and efforts to help those both fleeing the war, and remaining in Ukraine.

‘Russia first invaded Ukraine in 2014. On 24th of February 2022, it has waged a full-scale war. Since then approximately 16 million people have been displaced from their homes, half of whom have left the country altogether.1, The overwhelming majority of these people are women with children, leaving their behind husbands, fathers. More than half of the total number of Ukrainian children have been displaced.2

Of those who left Ukraine, most relocated to the neighbouring countries; ~15% to Russia, (including forced relocation), ~15% to Poland, and a much smaller percentage to other countries. Germany welcomed 10% and the United Kingdom – 1%.3

Since the announcement of the Homes for Ukraine (H4U) scheme, I have been struggling with understanding the terms which apply to Ukrainians participating in the programme. I approached some academic colleagues in Law and Politics to launch a comparison study of the legal, economic and ethical implications of the status that different groups of displaced people obtained in the United Kingdom in the recent years – from Syria, Afghanistan, and Ukraine. This inquiry would have helped to understand potential long-term consequences for the lives of the affected people, given my interest in long-term effects on health and wellbeing of adverse events in life. However there was the more immediate demand of hands-on activities within Canterbury for the Ukraine taskforce which required my attention; this question would have to remain on the back burner. I am still open for a more formal collaboration in this area, so please get in touch if you are interested.

I began to think about the definition of ‘refugee’;  a refugee is “one that flees, especially a person who flees to a foreign country or power to escape danger or persecution.” Based on this, all Ukrainians who have crossed the border are refugees, regardless of which national government scheme they ended up using. Yet, in the UK a simple look at the features of the H4U scheme shows striking differences, compared to the asylum programme features:

These are the differences on paper, and considerable research is needed to understand what is happening de facto (as for example, with the right to work, when many employers prefer to err on the side of caution and not employ Ukrainians before they get National Insurance numbers, which can take weeks) and also what the long-term consequences of those circumstances will be. So, with this blog I would like to invite my colleagues to think about those questions and initiate research which would get us closer to producing evidence needed for a improved action. Refugee week is a good reminder of this need.

I also would like share with colleagues some initiatives that I have been involved with where we have been able to make a difference in the lives of Ukrainians fleeing the war, thanks largely to support from Kent colleagues and wider academic circles.

The very first plea for support has been issued on this Crowdfunding to help women and children escaping the war in Ukraine on their way to safety on JustGiving page, and we have been able to help many people within Ukraine to get to safety – whether that be paying for transportation, arranging for the safe shelter en route to the border, or supporting the volunteer groups which evacuate people from Mykolayiv or feed displaced people fleeing from Kharkiv region. You can read about the details in the updates here We Are Ukraine | Facebook. The remaining funds there are set aside to pay for the transportation of another family of four which we helped to evacuate from Mykolayiv region and found them a sponsor in Kent. Currently they are in Romania but will be coming soon.

Another project realised with the help of the We Are Ukraine | Facebook group is in collaboration with the Ukraine Charity – Olena Nizalova is fundraising for Ukraine Charity (justgiving.com). We have been able to send 4 lorries full of food, sanitary and baby products to three regions in Ukraine (Chernivtsy, Lviv and Rivne), from which the local charitable organisations took the smaller shipments to the hardest to reach to reach areas, Mykolayiv, Kharkiv, Dnipro. Currently, we are raising funds to buy a small van for the City of Kindness МІСТО ДОБРА Центр доброти для мами і дитини. | Facebook, our partner organisation which is sheltering many women with children from all over Ukraine and also transport shipments to mothers further in the East and South of the country.

Finally, we are closing the circle with the work done by the Canterbury for Ukraine organisation – helping refugees from Ukraine settle in the area. This is powerful taskforce bringing together Canterbury Christ Church University, University of Kent, Canterbury City Council, Kent County Council, Diocese, Canterbury Welcomes Refugees, Kent Refugee Action Network, and other people who would like to make a difference and provide support to those coming to our area under Home for Ukraine programme. We have a weekly Welcome hub, bespoke support with H4U matching and visa applications, school placements for children and summer activities, as well as social support. You can find more details on the group’s facebook page Canterbury for Ukraine | Facebook.

The war is not over and a lot of support is needed. Now more than ever. Please see what you can do – from research to donation to volunteering. Every single bit counts. Every single bit brings us closer to peace.’